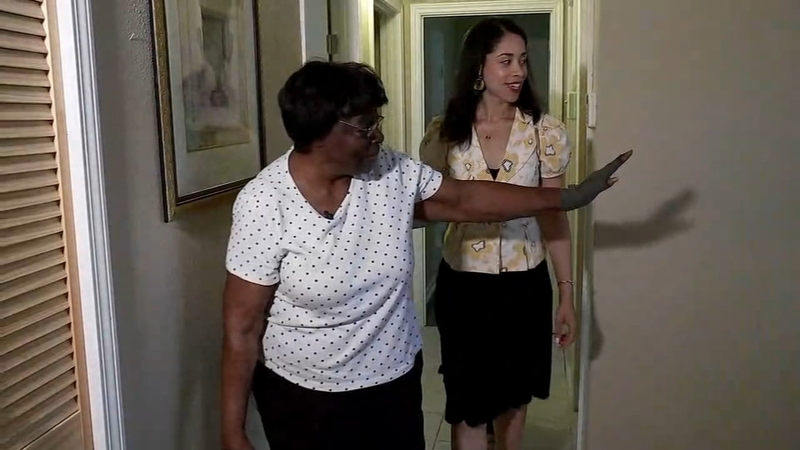 HOUSTON, Texas (KTRK) -- Maxie Arvie sat in her old bedroom Monday and marveled at the change.

"It's the same place, but different," she observed.

Two years ago, she evacuated in advance of the predicted flood from Harvey, and was glad she did. But she returned to a house that had taken on a lot of water, with furniture ruined.

"There was a terrible smell everywhere in the neighborhood," Arvie recalled as water logged debris filled the streets.

She hadn't had the money to repair the home of 30 years, where she had raised her children.

"There are so many memories here. My children grew up and I lost my husband later," Arvie said.

The only thing she salvaged was a large wood table.

"I worked so long on saving that," Arvie said.

The future started to change when she contacted Baker Ripley, which began the application process for flood repairs.

It connected her with SBP, a non-profit that began in Louisiana after Katrina, that specializes in streamlining disaster recovery time.

"I thank them so much," Arvie said.

SBP, in association with AmeriCorps, has repaired 150 Harvey homes in the Houston area, helped by a $8.5 million donation by the funds raised by JJ Watt after the flood.

Miss Arvie's home recovery is one that's now complete, but there are many more still waiting.

Across the street from Arvie is a house that remains gutted and empty. There are more throughout her neighborhood.

But in her home, free of mold, with new sheetrock and paint, there is a new beginning.

She has recovered from Harvey, and more recently, from cancer.

"It's all about faith," she said. "There's a light at the end of the tunnel, and it's a beautiful light."