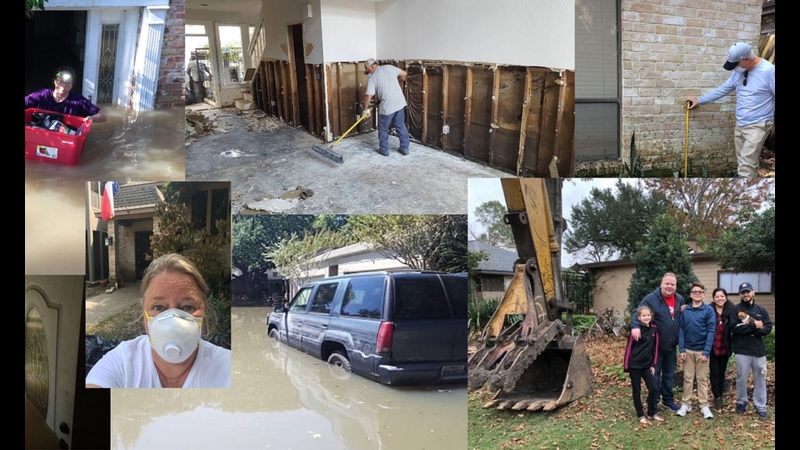 Hurricane Harvey funds through Houston only help 10 victims so far

HOUSTON, Texas (KTRK) -- Tom and Lisa Slagle are tired of waiting. They waited 18 months after Hurricane Harvey flooded their home before the City of Houston invited them to apply for its federally-funded aid program.

They waited another month before completing their application in-person at one of the city's intake offices. And even though the couple says they were told it would only take four to six weeks before they'd hear from an inspector who would schedule a walk-through of their Kingwood home, they waited twice that long.

Throughout the entire process, the Slagles, and dozens of other families who reached out to 13 Investigates, say they've had to contact the city asking for updates on the process.

But, they aren't getting any answers on the timeline or even the status of their application.

On Monday, the city said that of the thousands of people interested in getting help from a federally-funded program, only 10 have completed or have pending construction to their once-flooded homes. Another three are in loan closing and nine more are pending environmental approval by the Texas General Land Office.

The number of people helped is slightly up from last month when 13 Investigates reported only four people had received aid as of June. Meanwhile, the city says 4,500 households were invited to apply to one of the city's Homeowner Assistance Program options and more than 17,000 Houstonians have taken the city's Harvey Recovery survey.

"When this program came up, we had to discuss whether we were even going to attempt to do that because of the frustration that usually comes with (it)," Lisa Slagle said.

Months after applying, she and her husband, Tom, were hopeful when the city finally reached out to them to schedule a walk through on July 18. But, after all that waiting, they weren't surprised when the inspector apologetically called the night before, saying he had to push their appointment back three hours because the home he was in the middle of inspecting was taking longer than expected.

"You schedule your time around it and it doesn't happen and so now 21 months into it, our tolerance of that is about zero," Tom Slagle said.

Last month, 13 Investigates revealed a team of consultants has been paid at least $6 million to manage the city's program despite how few people are receiving help. Since that investigation, more than 230 people who say they've applied for federal aid through city, county and statewide programs have reached out to 13 Investigates with their own frustrations.

The city sent a statement saying, "We're asking everyone who still needs help recovering from Harvey to stick with the process. We understand people can get frustrated by bureaucracy but don't count yourself out."

Records obtained by 13 Investigates shows ICF Incorporated, the group hired to do outreach and case management for the city's recovery program, has been paid at least $1.7 million so far this year.

On June 28, we sent another open records request for reports and invoices between the city and ICF. Government agencies are required to respond to such requests within 10 business days or ask the Texas Attorney General for an open records ruling. The city still hasn't provided the information we requested, nor has it asked the AG for an opinion on whether or not it can withhold certain documents.

The Slagles have flood insurance, but still spent thousands of dollars of their own money to fix their home after Harvey drowned it with four feet of water in August 2017. They saved every receipt, work order and contract, hoping they would be reimbursed for some of the work.

But, federal rules to qualify for the funds change with every storm and the General Land Office says this is the first time Texans have been able to apply for reimbursement as part of the U.S. Department of Housing and Urban Development's Community Development Block Grant-Disaster Recovery program. That means homeowners who completed repairs on their homes out-of-pocket could be reimbursed for some of their expenses.

The city says part of the reason they haven't been able to help more families is because the federal funds for Harvey weren't finalized until February. Although the GLO gave the City of Houston and Harris County the ability to run their own disaster recovery programs, there is one stipulation - the state has to approve all federally-funded reimbursement checks or construction.

GLO spokesperson Brittany Eck said this is to make sure that when they're audited at a later date, the federal government will agree that the funds are allocated properly and the state won't have to worry about paying any of that money back.

"The process is, as they're receiving applications and going through them, they submit applications to us and we have to determine whether or not they're complete and eligible," Eck said. "GLO does get final approval."

About 4,500 households were invited to apply to one of the city's Homeowner Assistance Program options. The city says it has submitted 95 applications to the GLO for review. The state agency approved about 23 percent of those applications. The GLO said the rest of the applications were kicked back to Houston because they were either incomplete or had missing information.

"We anticipated that the review process would require more back and forth in the beginning, and are working well with the GLO to make sure we're meeting all requirements while moving efficiently for homeowners," the city said in a statement to 13 Investigates.

The city admits the program isn't moving as quickly as they'd like. Last month, McCasland told 13 Investigates he hopes the program ramps up to help 200 people every month.

On Monday, the city said it completed 206 damage assessment inspections and has 73 more in progress. The new target is to move 75 homeowners through to the construction or reimbursement phase by the end of August "ahead of the pace for local agencies in this county."

"We're coming up on the two-year anniversary (and) you still have a lot of people who are living in homes that need repair and reconstruction," Mayor Sylvester Turner said. "I'm not going to be satisfied until we're addressing all of the needs that exist in our city."

Of the 230 people who reached out to 13 Investigates about concerns with Harvey federal aid, more than 80 say they've applied for the City of Houston's program. We've reached out to all of them, and of the ones who have gotten back to us, the Slagle's have made it the furthest in the application process.

A city inspector spent four hours walking through their home on July 18, taking pictures of the property and detailed measurements, down to the inside of every cabinet. The following day - six months into the process - Lisa Slagle said she finally learned the name of the housing specialist assigned to their case.

Now, the couple is back to waiting.

"At the end of the day, expectations," Tom Slagle said as he shook his head. "Nothing."