Millions worth of city-owned cars were put underground during Harvey 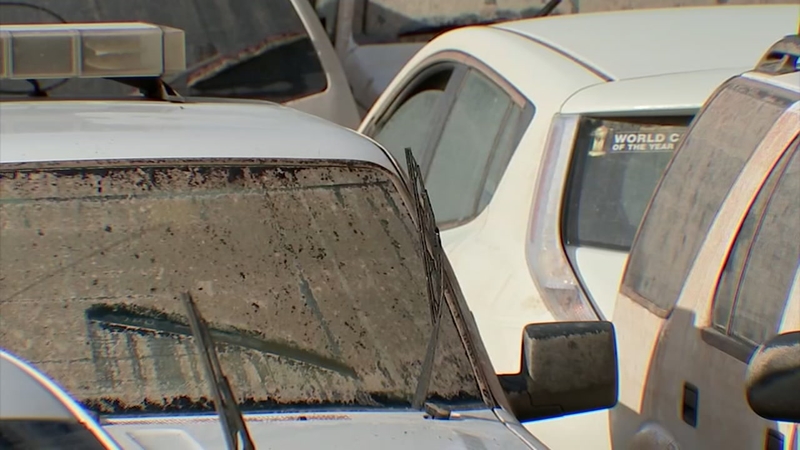 HOUSTON (KTRK) -- Despite some heroic work by city of Houston employees, the city still lost more than $10 million worth of cars and trucks in Harvey.

Some of the loss is understandable. But not all of it.

New video shows part of the reason for that loss -- and a moment the city of Houston never saw coming during Hurricane Harvey: water coming up and over a 15-foot flood wall behind the city hall annex.

The water flooded the parking garage's second floor completely, the last images of a surveillance camera there were of water overtaking the lens in an elevator lobby.

Water fills the top floor of the city hall annex parking garage after filling the bottom floor in about 90 minutes.

From there, the water went up through the elevator banks, then poured down hallways into city hall and the parking garages beyond.

That was the afternoon of Aug. 27.

As the first drops, then trickles, then waterfalls of water came over that wall, it was the time that the city would have to live with whatever storm preparation decisions it made.


On mobile? Want to view the story map in a full screen experience? Click here.

By that point, floodwaters were rising all over Houston and city employees were heroically rolling out in police cars, fire apparatus and heavy trucks to save lives. Unfortunately, but understandably, a long list of those city-owned cars and trucks flooded.

Hundreds of them are beyond repair.

It will cost taxpayers $11.7 million to replace them all.

But as we look at the list of flooded cars, there's one location that popped up again and again: Tranquility Garage.


Tranquility Garage is a sprawling complex that has thousands of parking spaces. It's one major drawback during historic flooding events: Tranquility is underground.

As Harvey approached and the forecast went from historic to epic amounts of expected rain, the city stashed more than 100 of its cars and trucks in an underground parking facility that had flooded previously during Tropical Storm Allison.

We got city photos showing some cars parked on the top level, but plenty were parked on the second and third levels of the subterranean facility. Some city departments moved vehicles out of other locations to the Tranquility garages, truly believing the garage wouldn't flood.

"Since Allison, when they took flood precautions, they have not flooded," said Jedediah Greenfield, spokesperson for the city of Houston's fleet management department. "It was not prone to flooding."

Once the millions of gallons of floodwater was drained, the city towed more than 100 water-logged, ruined, city cars and trucks, sadly wearing the city logo and the brown mark of flooding to a north side lot.

That brown residue covering the roofs of each vehicle was proof of how high the water was underground in a supposedly safe place.

If doesn't have to be that way.

The city doesn't own high-rise garages, but neither does METRO and ABC13 found its buses high above interstates on HOV lanes.

As for the city, there is no city-wide plan, every department makes its own rules on how to best manage its vehicles.

Kubosh was angry the last time it happened in 2015 at another city-owned garage. That time, the flood gate wasn't closed. This time, water went over it.

"Someone is responsible," Kubosh said. "We need to quit losing our vehicles in floods."

The city is hoping FEMA will pay to replace most of the lost cars with federal tax dollars.