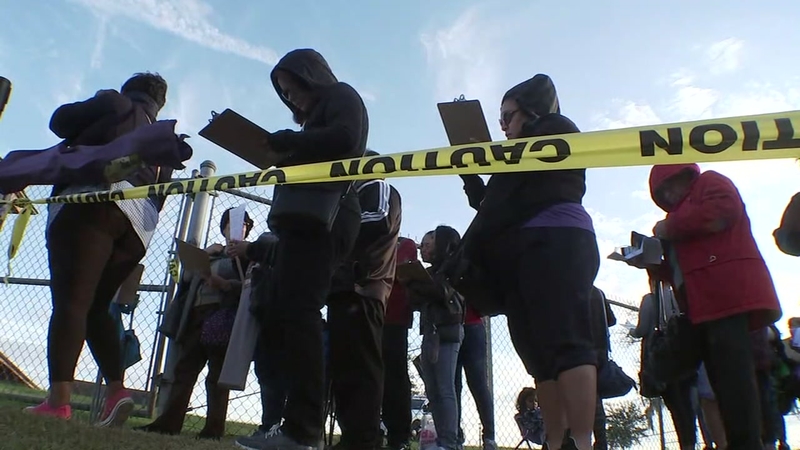 The three-day disaster relief site opened for a second day at 8 a.m. Thursday.

Some people started lining up the night before but by midday the crowds and lines had thinned out.

Wednesday, Judge Emmett raised a red flag, saying the D-SNAP extension ordered by the governor has become a government giveaway instead of targeting people who really need it.

Commissioner Smith said no one is physically checking to see if applicants had storm damage before being given emergency food stamp assistance.

The process requires applicants to fill out paperwork and declare financial and property losses. If someone lies, fraud investigators will only go so far.

"As I pointed out, these cases are being reviewed. We have fraud investigators that are on site today," said Smith.

Information given by applicants is screened and compared to FEMA disaster records.

"Do we go out and do validation of their home and those types of things for damage? No. And that's not a requirement of the program," said Smith.

No physical surveys are conducted. No photos are necessary, either.

Asking anyone in line and you hear their stories of struggle.

Nearly one million people in Harris County have applied for emergency food stamps.

"Won't have to worry about paying for food. Just focus on paying my bills and stuff like that," said David Ryn.

Commissioner Smith says the system is designed to get food out to people as quickly as possible.

Those who do qualify may get money for two months-worth of groceries loaded onto a Lonestar card.

Anyone caught falsifying an application can be federally prosecuted.

ABC13 has made requests to find out if anyone has been prosecuted for fraud.