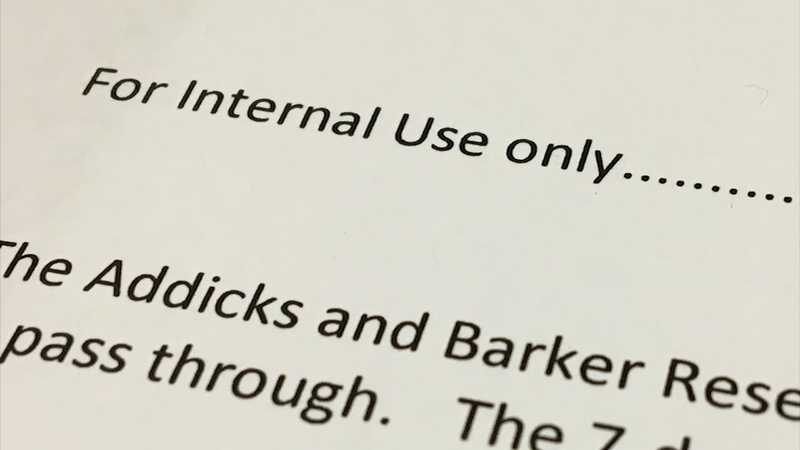 HOUSTON (KTRK) -- In the days before Hurricane Harvey made landfall, Army Corp of Engineers forecasts predicted that the Addicks and Barker reservoirs would spill beyond its banks with an expected 23 inches of rain, but the public was never told of that forecast. The forecast discounted the actual rainfall amount by about half.

Those forecasts along with hundreds of other internal documents were obtained by ABC13 Investigates through open records requests. Those documents show the first warning on Friday, Aug. 25. The Houston Chronicle, who obtained similar documents showing the warnings a day earlier, reported their findings first on Wednesday.

USACE is facing class action lawsuits from homeowners who were flooded.

Some areas of Houston actually saw between 50 and 60 inches of rain. The USACE used a computer model run from the National Weather Service to program its own computer to predict how full the reservoirs would get. On Friday, Aug. 25, the forecast told those reading it that water would start backing up onto private property soon. It warned of the high levels the reservoirs could reach with the 23 inches of rain predicted -- 23 inches that sounded wild at the time.

The documents show the Army Corps took the situation very seriously, sharing those forecasts with a number of emergency officials. But never with the public. The documents read "for internal use only."

Flood victims, like Marissa Masterson, could've used the extra warning to gather up more of her belongings before the water rose.

By the time she was told to leave, the streets were already covered with water.
EXPLORE: Water rescues during Hurricane Harvey

On Saturday, Aug. 26, in the hours after Harvey made landfall near Rockport, the forecasts were upped to 30 inches of rain.

"With rainfall continuing over the next 5+ days, the reservoirs are expected to exceed record pools," the forecast read. The first home was predicted to flood Monday afternoon.

Monday was the first day Masterson said she was added to an evacuation list. Had she known the dire predictions made Friday, she would've used that time to get things to save.

"We would have been able to save more," Masterson said. "Furniture, antiques... those irreplaceable photographs."

EXPLORE: 911 calls made during Harvey for Rescue

Corps officials worked "diligently with local, county, state and federal officials to inform the public on flooding risks," a news release said. In addition to press releases, it issued hundreds of Facebook and Twitter updates, the release said.

Inundation maps were also released to local officials for evacuation orders since the Corps is specifically prohibited from issuing its own, records show.

The release, dated Feb. 22, but not publicly released until Feb. 23, is titled "setting the record straight" and says the Corps informed the public about Harvey. It does not specifically address why officials didn't make the Friday forecast available to the public.

Harris County Judge Ed Emmett was briefed "from a myriad of sources" an office spokesperson said. Army Corps personnel were present at nearly all of the news conferences held by the county, he added.

"Corps officials were free at any time to emphasize any messages of which they felt the public needed to be aware."

Mayor Sylvester Turner said that if the information was available it should've been made public.

Masterson heard nothing from the Corps during Harvey, she said.