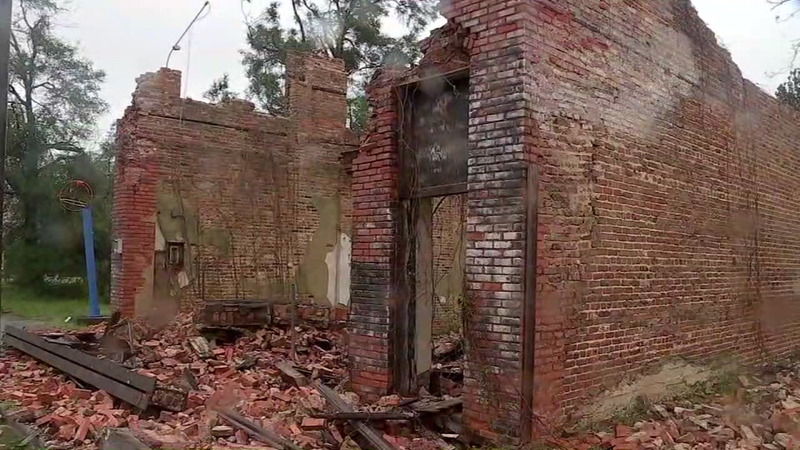 WILMINGTON, North Carolina -- Hurricane Florence was making landfall in North Carolina early Friday with a life-threatening storm surge that pushed water inland for miles and screaming winds that destroyed buildings in its path.

Seventy people had to be pulled from a collapsing motel at the height of the storm, and many more who defied evacuation orders were hoping to be rescued.

As of 6 a.m., Florence was centered just 10 miles east of Wilmington, North Carolina. Its forward movement was 6 mph. Hurricane-force winds extended 90 miles (150 kilometers) from its center, and tropical-storm-force winds up to 195 miles.

The storm's intensity held at about 90 mph, and it appeared that the north side of the eye was the most dangerous place to be as Florence moved ashore.

"Surviving this storm will be a test of endurance, teamwork, common sense and patience." Gov. Roy Cooper warned, describing day after day of disastrous weather to come.

Cooper also requested additional federal disaster assistance in anticipation of what his office called "historic major damage" across the state.

Prisoners were affected, too. North Carolina corrections officials said more than 3,000 people were relocated from adult prisons and juvenile centers in the path of Florence, and more than 300 county prisoners were transferred to state facilities.

Forecasters said conditions will continue to deteriorate as the storm pushes ashore early Friday near the North Carolina-South Carolina line and makes its way slowly inland. Its surge could cover all but a sliver of the Carolina coast under as much as 11 feet (3.4 meters) of ocean water, and days of downpours could unload more than 3 feet of rain, touching off severe flooding.

"We'll operate without power; we have candles. And you don't need power to sling booze," said owner Eli Ellsworth.

"This is our only home. We have two boats and all our worldly possessions," said Susan Patchkofsky, who refused her family's pleas to evacuate and stayed at Emerald Isle with her husband. "We have a safe basement and generator that comes on automatically. We chose to hunker down."
Report a correction or typo
Related topics:
weathernorth carolinafloodinghurricane florencerainu.s. & world
Copyright © 2022 by The Associated Press. All Rights Reserved.
TOP STORIES
Timeline breaks down Uvalde shooter's movements day of massacre
TX school shooting leaves at least 19 children, 2 adults dead
2 dead, suspect barricaded in NW Harris County, sheriff says
Uvalde school shooting: What we know about 19 kids, 2 teachers killed
Beto O'Rourke confronts Texas gov. at Uvalde shooting press conference
Houston mayor after shooting in Uvalde: 'Our values are messed up'
HISD staff encourage talking with kids about Uvalde tragedy
Show More
Where do Texas gun laws stand?
Mother of Houston Olympic champion receives donated food truck
Major crash shuts down NB lanes of Gulf Fwy at FM 1765
More firearm dealers than mental health providers in Uvalde
Here's what to know about NRA meeting in Houston
More TOP STORIES News