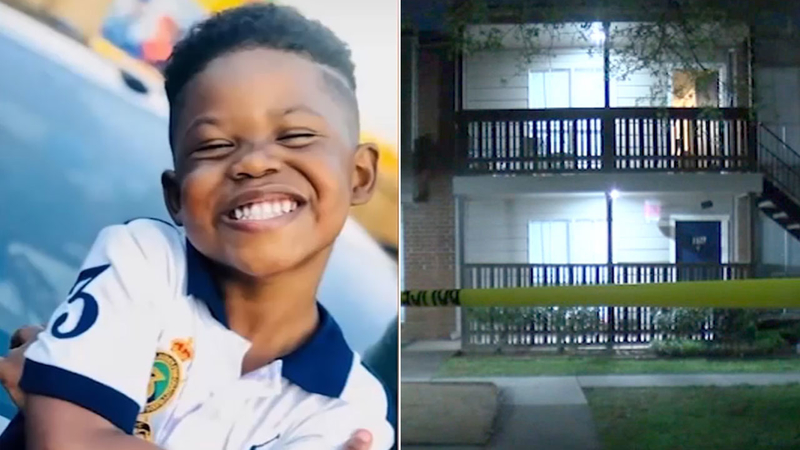 HOUSTON, Texas (KTRK) -- Just over a year after 5-year-old Jordan Allen, Jr., known to family as "Baby J," was shot and killed by a stray bullet, a woman has been charged in his death.

Shapree Stoneham, 30, is charged with felony murder after court documents said she knowingly fired a gun in the direction of an apartment on Richmond Avenue and was reckless as to whether the space was occupied. She remains at large.

"I was a little bit relieved, but still in the sense like, she hasn't been caught," said Tiyanna Jones, Jordan's mom. "So my heart is still heavy, but I feel glad to know that they actually have a name behind the shooting."

That bullet hit Jordan in the back of the head while he was playing outside on March 31, 2020. He was making TikTok videos with friends on the balcony outside of his father's apartment.

Jordan was taken to Texas Children's Hospital in critical condition. He was taken off life support on April 3, 2020.

According to court documents, a witness had been standing on the second-floor balcony with Jordan, his father and two other children, when she heard gunshots coming from the parking lot. She saw a dark colored, four-door passenger vehicle speed away from the gate.

"It's horrible," said Millie White, little Jordan's grandmother. "Just horrible. Just constantly thinking of him. Feeling sad because we can't find the killer, just bad because she took his life."

The witness told investigators there had been a fight at the complex earlier in the night between one woman and a second woman, who is friends with Jordan's father. The witness claimed the fight also involved a man, who was another friend of Jordan's dad.

The witness said she believed the vehicle that shots were fired from was also the same vehicle associated with the people involved in the fight.

Authorities said they spoke to the second woman, called Witness #2 in court documents, claiming that she admitted to having a fight with a woman before the shooting. Witness #2 said that during the fight, there was yet another woman, who stayed in the car.

After the fight, said the two women drove away.

A tipster spoke to police and shared a recording where Stoneham identified herself in a conversation about the shooting, court papers show.

Also in the recording, Stoneham allegedly said that if the police came after her, she would be "gone on the first train to Austin."

On Monday, April 6, 2021, investigators said that Stoneham called them to say she wasn't involved in Jordan's murder and that it was her cousin who shot and killed the boy.

Officials said that on April 7, 2021, she was told to give a recorded statement, but Stoneham declined because she was in Austin and would need a ride to Houston. She was contacted at least five times over the next several days, but she declined, officials said.

As of April 14, 2021, her current location was unknown and she no longer answers her phone or returns phone calls.

Last year, Stoneham was identified as a person of interest in Jordan's shooting, along with Khalisah Smith, who is now 19, and Alexis "Lex" Gore, 23.

According to court documents, Gore denied being at the shooting. In the recording, Smith was named as one of the women involved in the fight. She was also allegedly in the passenger seat of the car.

Now the challenge is finding Stoneham, who is currently the only person charged with Baby J's death.

Stoneham is still active on Facebook, posting a Biblical reference several days after she was charged with murder.

"I saw her Facebook, she posts a lot of scripture," said Jones. "I don't know if that's her conscious, she should just turn herself in at this point because we know who you are."

WATCH: Jordan Allen Jr. was killed six months ago after being struck by a stray bullet while playing outside his father's apartment.