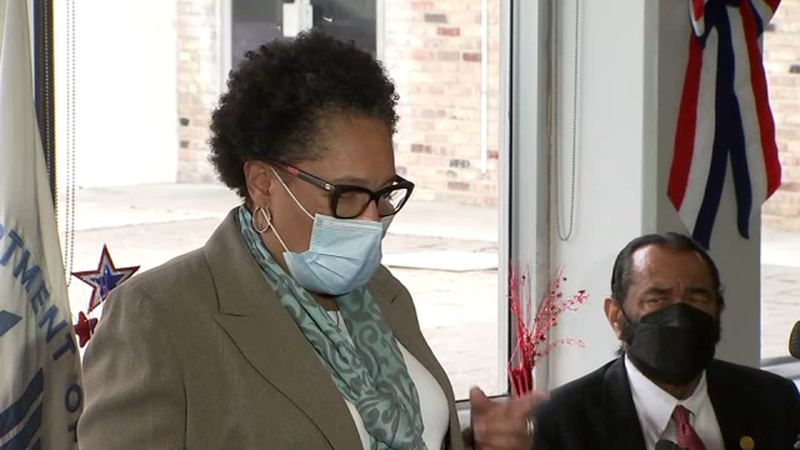 Fudge announces $45 million for the homeless in Houston

Fudge announced that $45 million will be given to combat homelessness in Houston.

In the audience of her town hall meeting at Cuney Homes in Houston's third ward was Vernoica DeBoest, a long time public housing resident. DeBoest told ABC13 she has seen so many come and go with so few able to afford their own homes.

"People have been in here all their life," she said. "People have died in here just wishing that they could get a home."

She was hopeful the attention today from the federal government leads to more assistance-not only keeping roofs over their heads but roofs they can call their own.

Secretary Fudge acknowledges the skyrocketing cost of housing and says the current administration is working to infuse supply with a commitment to help build 100,000 affordable homes in the next two years.

"We know in order to get prices down, we have to build more housing. There is no other answer to it," Secretary Fudge said. "The only thing we can do is use the money from the rescue plan and others to build more housing. It's just supply and demand. Because we don't have enough supply, the demand is so high, the prices continue to rise. So in order to take the stress off the market, we have to put new affordable housing in the market."

During her Houston visit, the Secretary traveled with members of congress to the US Vets complex which houses homeless veterans, TSU, a senior living facility in West Houston, and Cuney Homes-different places working toward the same end in an economy that seems to get tougher by the day. For some, there is no roof at all. According to the Coalition for the Homeless, in 2021 more than 3,000 people were homeless at any given time, one in seven of them because of the pandemic. Still the city and the county are making progress slowly but surely.

"With the cooperation of nonprofits and the city and the county, we're getting there," said Congresswoman Sheila Jackson Lee.

The goal is twofold; to prevent homelessness or mitigate it where possible while at the same time helping people find permanent, affordable places to live.

"We want to turn things around a bit, not only deal with homelessness but allow people who can afford to purchase a home to get that opportunity," Fudge said.