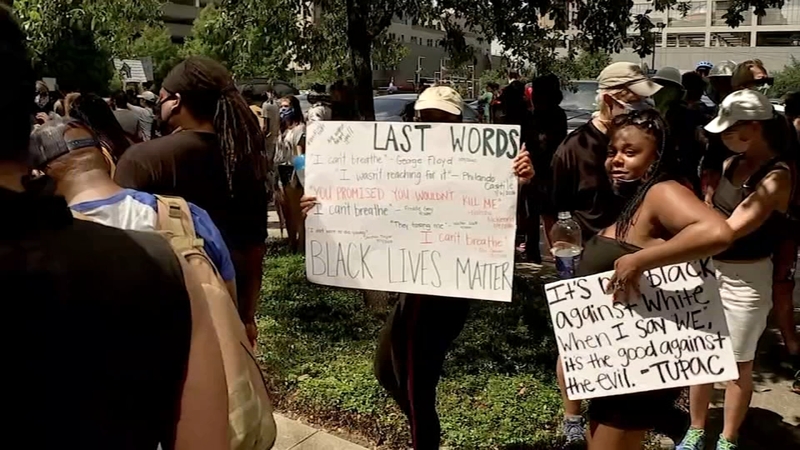 HOUSTON, Texas (KTRK) -- In the days since 60,000 marchers descended on Houston's City Hall, the mayor has announced a task force designed "to review internal (Houston Police Department) policies and procedures."

The task force is not due to report back to Mayor Sylvester Turner until September.

Turner's office told 13 Investigates in a statement, "Mayor Turner has not indicated whether he will take on police reform before his task force returns or after looking at their recommendations. He is having ongoing conversations with the HPD executive command staff."

But, that may not be fast enough for activists who have marched and demanded change for a long time.

"My mom was an activist," Houston attorney and activist, Jolanda Jones, told ABC13 Monday afternoon. "The message was we want reform now and with the police."

When asked about a task force, Jones was one of three activists who told 13 Investigates today that it's not needed.

"Sylvester knows people," Jones said. "He could call me on my cellphone and I'm not saying it to be mean, but I'm going to need for you to show some leadership. ... A task force isn't it."

Houston activist Travis McGee reminded Turner of his roots, saying "the mayor is from the four-four. I'm from Sunnyside."

McGee, too, says a task force is another way to wait.

Johnny Mata, who has marched for various causes in Houston for decades said Tuesday, "Rather than getting another committee to get public hearings ... they should initiate an independent review board with subpoena power."

All three are pushing for a police civilian review board. It's an idea Houston activists have suggested is needed for decades.

McGee backs the idea, calling the current committee, which is without subpoena power, appointed by the mayor and friendly with police administration, ineffective.

"We don't need to the police investigating the police. That's like Dracula guarding the blood bank," McGee said.

Jones said, "My question to the police is why don't you trust the citizens to look into what you do? So can you see why we maybe don't trust you to do what you're doing with integrity?"

While they wait for City Hall's next step, Jones is not sparing criticism of the Mayor.