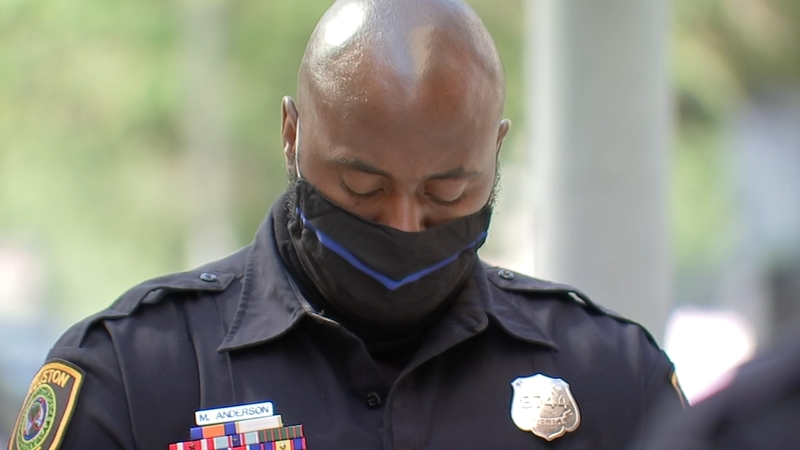 The event, which was held outside of the department's Edward Thomas building on Travis Street, was dedicated to fallen officers across the country, including those who lost their life in Houston.

The department said since 1860, a total of 119 HPD officers have died in the line of duty.

"We have a duty to uphold their honor, the ethics, the commitment that they made, and not dishonor their legacy or their name," said a speaker at the event.

Here are a few officers and other Houston-area law enforcement members who lost their life within the last two years.

Houston police Sgt. Christopher Brewster was killed in Dec. 2019 while responding to a domestic disturbance call on Avenue L. When Brewster arrived at the scene, the couple had left the location, but were found walking in the 7400 block of Avenue L. Brewster came under fire as soon as he tried to exit his patrol cruiser, according to then - HPD Chief Art Acevedo.

Arturo Solis, 25, was the suspected shooter, Acevedo said at the time. Solis has a lengthy criminal history, including a charge of assault causing bodily injury.

HPD officer Jason Knox died in May 2020 in a police helicopter crash. Knox and HPD helicopter pilot Chase Cormier were searching the bayou for a drowning victim when their helicopter went down near Greens Bayou.

Knox was an 8-year veteran of HPD. He was a tactical flight officer who joined the Air and Marine Division of HPD in January 2019. Prior to that, Knox served as a Harris County deputy constable.

A 41-year veteran of HPD, Sgt. Harold Preston was preparing to retire from the force this year, but his plans were shattered when he was shot and killed Oct. 20, 2020.


The son saw that Manzano had a gun and told officers. That's when Manzano fired multiple rounds, hitting Waller and Preston, Acevedo said.

On Monday, Nov. 9, 2020, Sgt. Sean Rios was headed to the airport when he was involved in a shootout with a suspect in north Houston.

But Houston police were not the only agency mourning a tragic death of their own.

A 10-year veteran of the Harris County Sheriff's Office, Sandeep Dhaliwal died in Sept. 2019, after he was shot during a traffic stop in northwest Harris County.

In Dec. 2019, Nassau Bay police Sgt. Kaila Sullivan was one of multiple officers attempting to arrest a man wanted on warrants when she was hit and killed by the suspect's vehicle.

WATCH: Family and friends gave a touching final farewell to Nassau Bay Sgt. Kaila Sullivan Wednesday morning. Here's a compilation of some of the most heartfelt moments.