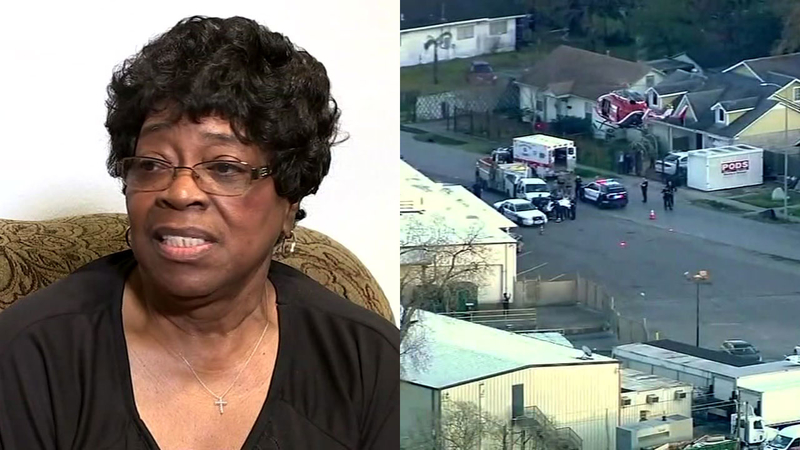 HOUSTON, Texas (KTRK) -- When she saw the images of the Harding Street raid flash across her TV screen, Elizabeth Gonsoulin's emotions began flooding back.

"I'm reliving this again, sirens, and in my mind," said Gonsoulin, who has lived in her tidy little home since the 1960's.

On March 19, 2013, her peace and quiet shattered forever. Gonsoulin, her husband, her son George Benard, and a grand-daughter were all home when police broke down her door in a no-knock raid.

"All of the sudden they just busted in the door," remembers Gonsoulin. "George had gotten up to go to the kitchen to get water, and when they busted in, they automatically shot him, even though he was just going to the kitchen."

The officer who led raid on Gonsoulin's home is Gerald Goines, the same narcotics officer that was the case agent in the botched Harding raid.

"I don't want to remember his face, to be honest," said Gonsoulin of Officer Goines. "Because, all I remember is that gun in my face, and telling me to 'shut up, and sit down.' I'll never forget that."

George Benard would be in a coma for 2 months, and eventually, had most of his fingers and toes amputated because of complications from the raid.

Dennis and Rhogena Tuttle died in their home on January 28th, something Pastor James Nash says should never have happened.

"I'm hoping the chief will really take a look at this, because there are so many questions as to what happened out there," said Pastor Nash, who has a close working relationship with HPD as a member of the Houston Ministers Against Crime.

Nash also happens to be the Gonsoulin family pastor, and has tried to guide the family as it works through the fallout from the raid and shooting.

"Something should happen," said Nash, who wants to see criminal charges if they are warranted. "You do know the police can break the law too," he said.

George Benard's drug charges, the impetus for the no knock raid in 2013, were dismissed. The family did file a civil suit with the city, but that case is also dismissed.

Late Monday, Goines' attorney Nicole DeBorde weighed in on the Harding Street allegations, marking the first time since the shootout that the officer or a representative has commented:

"These partial information leaks appear to be calculated to spin this story in a particular direction without regard for truth or justice. Goines has been cooperating with this investigation voluntarily since he was first able. He has been in intensive care with his jaw wired shut and on a ventilator for the bulk of the time. He reached out on his own to the investigators handling this case it is absurd that they have portrayed it any other way."