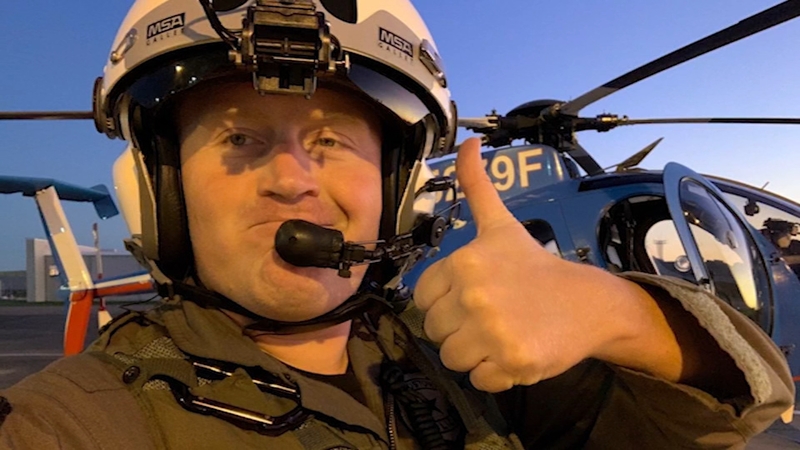 Fallen HPD officer Jason Knox's father, Mike, recounts the kind of person he was and how he lived his life

Officer Jason Knox died in the line of duty due to a Houston Police Department helicopter crash Saturday morning.

Images of the wreckage were shared widely on social media, but Knox's family wants the city to remember the way he lived his life, not just how it ended.

"That's the thing about heroes. If people are telling you they are, they're not. Heroes don't even know they're heroes," Jason's father, Mike, said.

Mike is a Houston city council member and a former HPD officer. Jason followed in his footsteps, but growing up, that path wasn't always obvious.

"He had a sarcastic streak and a little bit of mischievousness, but it was all good-natured," Mike said.

One of Jason's first loves was flying, which he started at just ten years old.

"On his sixteenth birthday, we had to stop by the flight school, so he could do his solo check ride and get his solo license on the way to the DPS office to get his driver's license. It was important to him that he could fly before he could drive. When he set his mind to something, he wanted to get it done. He found a way to do it."

In his twenties, Jason started working at the Precinct 5 constable's office and a few years later continued on to HPD.

"I told him, 'Listen, you're going to have to guard against cynicism because when you deal with crime all the time, pretty soon you begin to believe that that's what people are about. That's a small percentage of our population. The vast majority are not committing crimes,'" Mike said.

Jason didn't forget that lesson. Friends and family say interacting with people was one his favorite parts of the job.

"When he talks to people, he listens to them and responds to them. He's a better man than I will ever be. Or he was a better man," Mike said.

Jason restored old police cars for parades and to be ambassadors for the department. He called them 'conversation pieces.'

"He parks the cars, and people come and look at it. He gets to talk about the Houston Police Department."

His love of flying converged with his career and led him to the skies as a tactical flight officer in the HPD helicopter fleet.

"I'm told he had eyes like an eagle. He could see stuff nobody else could see," Mike said. "During Imelda, people get washed off the road and were clinging to a tree and he flew over and found them."

As the department and police officers union surround the family with support, Jason's parents, wife and two young kids each grapple with the idea that Jason isn't coming home.

It feels like we're a little less safe now without Jason on patrol above us, his family says. But, he's still up in the skies, watching over them and the city he loved.

"He was never really into self-promotion or anything like that. He just did the right thing, and he enjoyed helping people," Mike said. "And he was a hero."

FULL INTERVIEW: 'He would want to be remembered as just a good man' Father of Jason Knox recalls his life
EMBED More News Videos

“He would want to be remembered as just a good man.” ABC13 talked to Mike Knox, the father of fallen HPD officer Jason Knox, who recalled several heartfelt moments with his son.