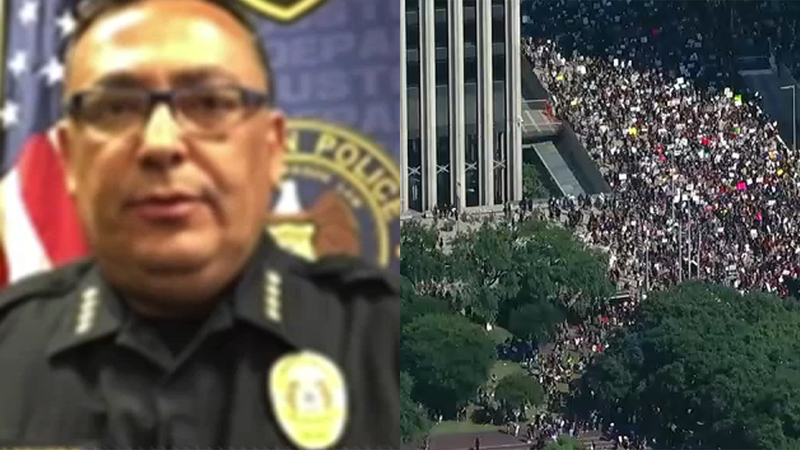 "I think our governor has already responded to that, and this is Texas," Acevedo said. "We have our cities well, we're keeping them safe. Things are going well here and we don't need any support in terms of federal troops."

Acevedo suggested it'd be better to rely on people who know the city and are trusted by the community, such as activists

This is the not the first time the Houston police chief has spoken out against President Trump's reaction to the ongoing rallies and protests. Earlier this week, while on CNN, Acevedo commented on Trump's message toward 'weak' governors.

"Let me just say this to the President of the United States on behalf of the police chiefs in this country, please, if you don't have something constructive to say, keep your mouth shut," Acevedo said during an interview with CNN. "Because you're putting men and women in their early 20s at risk. It's not about dominating, it's about winning hearts and minds.

During his GMA interview, Acevedo also gave a few details on the preparations underway for George Floyd's funeral next week.

"We're working close with the family. Yesterday we helped them plan the funeral," he said. "We're really honored by the fact that they've allowed us to work with him."

Acevedo has been speaking out since the news of Floyd's death broke out. His first statement came a few days after Floyd's death, "putting your weight, putting your knee in the back of an individual's neck is not acceptable in this department and it's not acceptable in any legitimate police department that I've encountered in my career," Acevedo said.

Since then, he has spoken at various rallies and marched with numerous people to show his support.

Watch his interview in the video above.

FULL INTERVIEW: "It's time to presidential, not like you're on The Apprentice," Acevedo said in an interview with CNN. "This is not Hollywood. This is real life, and real lives are at risk."