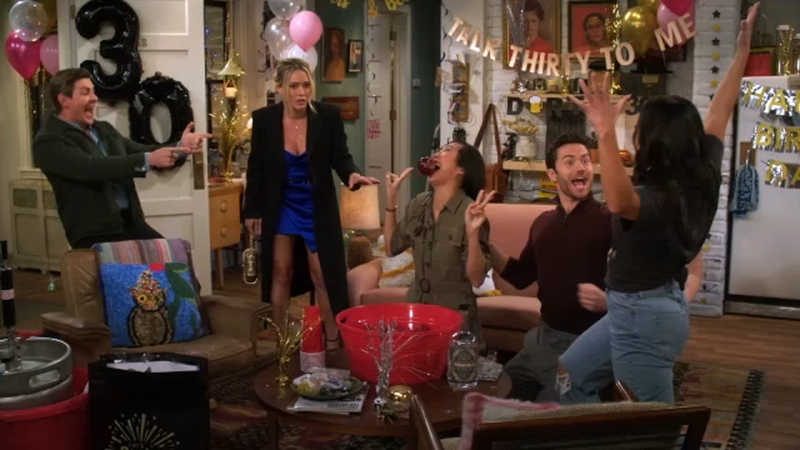 NEW YORK -- "How I Met Your Father" is the sequel to a hit sitcom that ran on broadcast television for nine years.

There are more than 200 episodes of the original "How I Met Your Mother" that still re-run. So, a follow-up seems logical.

The two producers of the original show, Carter Bays and Craig Thomas, handed off their creation to executive producers Isaac Attacker and Elizabeth Berger, who helped make "This is Us" a major hit.

The pair work with an ensemble cast headed by Hillary Duff and featuring Kim Cattrall.

The show begins in the year 2050 with a mother played by Cattrall calling her son and saying, "I want to tell you the story of how I met your father."

Her tale is told in a series of flashbacks to 2022 where her younger self is played by Duff.

"There is space to just really speak to what it is to be 30," the star said.

A group of close pals have different experiences in New York City.

"It makes it possible for many people of such different backgrounds and personalities to come together in a space and find something in common," Saraj Sharma, who plays Sid, said. "That's New York and that's the show too."

His colleague Christopher Lowell agreed by pointing out, "If you want a hit sitcom: 'Friends,' ''Seinfeld,' 'How I Met Your Mother,' you just have to have a group of friends living together in New York having fun and shooting it all in Los Angeles."

Fans of "How I Met Your Mother" will find similarities here, but differences too, said the performer who plays Valentina, Francia Raisa.

"I definitely was a fan of the original show, and I still watch it sometimes," she said. "I think this show is its own, stand-alone sequel."

"It's an adult story so now we get to use the dialogue we would use in out everyday lives and that's very freeing and exciting," Tran said.

It's especially exciting for the executive producers.

"It's really night and day from being on a broadcast network," Isaac Aptaker said with enthusiasm.

His creative partner Elizabeth Berger agreed saying, "I think with Hulu you definitely have the freedom to be a little bit sexier, a little bit edgier."

Both said the members of their cast have truly bonded even though half of them had never done a sitcom before.

"All of us were a little afraid," Tom Ainsley confessed. "And, we all sort of banded together and picked each other up when we were down."