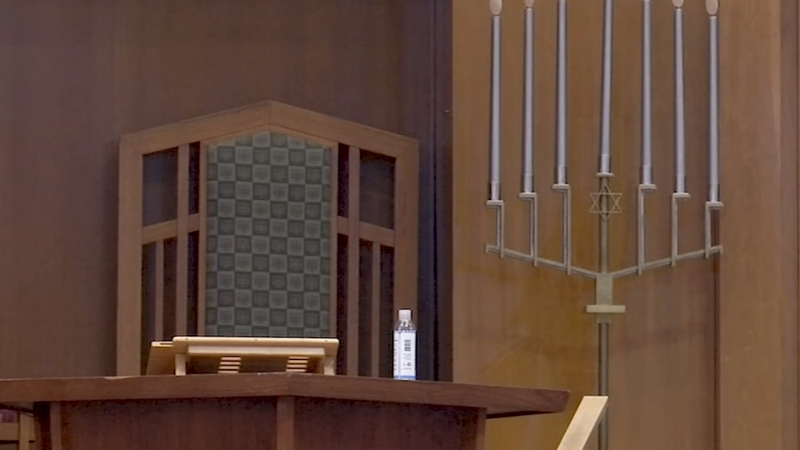 DA program looks to step up security at Jewish organizations

HOUSTON, Texas (KTRK) -- The Greater Houston area's approximate 80 Jewish organizations and programs will have a new security director to turn to. This comes in response to the increase of antisemitism across the country and the hostage incident at a synagogue in Colleyville over a week ago.
Harris County District Attorney Kim Ogg gathered with more than four dozen law enforcement officials, faith-based leaders, and representatives of nonprofit organizations Monday morning to show solidarity against religion-based hate towards Jewish congregations. Rabbi Oren Hayon, who leads Congregation Emanu El, pointed out this is the third time they've assembled in this fashion during the last three years to speak out against hate toward the Jewish community.


"We at the District Attorney's Office are doing all we can to reduce the amount of time police have to spend in court on minor crimes so they can be in the streets preventing crimes of violence," said Ogg. "We want to see more officers in the streets so that they can patrol areas near houses of worship to prevent hate crimes. We are not going to tolerate hate in our county."

The press conference also announced a new security director through the Jewish Federation of Greater Houston. Renee Wizig-Barrios, who is the CEO and president of the nonprofit organization, said the new addition is made possible by a generous anonymous donor, who will fund the position for three years.

RELATED: Anti-Semitism on the rise in Southern Texas with 6 incidents reported in first month of 2022

The security director will act as an expert security advisor, liaison, and a training coordinator for the community. Wizig-Barrios said they will meet with Jewish institutions (synagogues, day schools, etc.) and law enforcement to facilitate necessary trainings and assessments. As a result, they will help strategically set up a comprehensive approach to the community's security.

"The alternative is to have every individual organization making its own standards and hiring its own professionals. With this, we've got a single point from which intelligence and guidance can be disseminated from our federal and local law enforcement agencies," said Rabbi Hayon. "They can make sure we are all united in what we need to do, using the best practices that are up-to-date."


In interviews following the hostage incident on Jan. 15, Rabbi Charlie Cytron-Walker of Congregation Beth Israel in Colleyville credited their security training for the reason that he and three other members of his congregation were able to safely escape.
Last week, Rabbi David Lyon of Congregation Beth Israel shared with ABC13 that the price tag of implementing security plans can be crippling for some synagogues, both large and small. Rabbi Hayon said that their annual costs at Congregation Emanu El for safety measures are up in the six-figure range. To help offset some of the financial burden, the Department of Homeland Security provides grants.

Wizig-Barrios said in 2021, the Department of Homeland Security provided $1 million to eight local Jewish organizations. Congregation Emanu El has been one of those recipients in years past, but noted that the process to apply and obtain this funding can be difficult. That's where the new security director can help with alleviating those barriers and guide Jewish congregations in the application process.

"I am encouraged and gratified by the fact that we are taking this step in Houston. This is really an important and probably overdue step for us, since other cities with sizable Jewish communities have already implemented this role," said Rabbi Hayon, "It gives me greater peace of mind, just like knowing that we've got fire extinguishers, stripes in our parking lot, and crosswalks for people to cross the street safely."


Their area extends from El Paso on the west end of Texas to Beaumont on the east end, and all points south. Major cities in the region include Houston, San Antonio, Corpus Christi, El Paso, and Beaumont.

Their latest national report shows 2,024 hate crimes against Jews in 2020 throughout the country, which is the third highest on record since 1979. Since 2016, Jews have been the targets of at least 21 extremist plots or credible threats, two of which occurred in Texas (Colleyville in January 2022 and Harlingen in June 2019). Although Jews account for 2% of the national population, experts said they make up about 60% of religion-based crimes.

The Jewish Federation of Greater Houston hopes to have the security director position filled within the next 90 days.