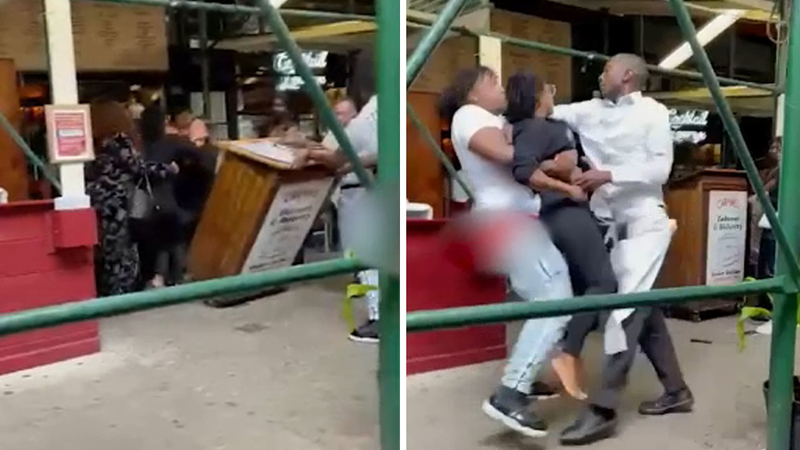 NEW YORK CITY, New York (KTRK) -- Three Houston women have been charged after police say they assaulted a New York City hostess when they were asked to show proof of vaccination to eat inside a restaurant.

Video shows the fight involving the three tourists at Carmine's Restaurant in Manhattan's Upper West Side at about 5 p.m. Thursday. It also happened to be the third day since enforcement of New York City's vaccine mandates began.

City inspectors had just commended Carmine's for their enforcement of the policy, but hours later, the hostess was attacked by the three women from Houston who didn't want to eat outside.

The women have been identified as 49-year-old Sally Lewis, 44-year-old Kaeita Rankin, and her 21-year-old daughter Tyonnie Rankin.

The cell phone video shows the chaos outside the eatery, and you can hear screaming as the women lunge at her and other members of the group. Staff jumped in to drag them away.

A hostess was assaulted at Carmine's on the Upper West Side, allegedly by three women who didn't want to show proof of vaccination

"She was very intimidated, crying, all that," Carmine's Chef Alejandro Delgado said.

The 22-year-old victim, who had only been on the job three weeks, asked the women for vaccination proof and then ID cards to match.

When she questioned the legitimacy of their vaccination cards, the out-of-town visitors got upset and lunged at her, punching her repeatedly and also injuring two other staff members.

The women reportedly didn't want to show ID, which police say contributed to the belief they were not valid.

"The last 18 months have been surreal for the restaurant industry," said Alicart Restaurant Group CEO and President Jeffrey Bank. "Everyone has done everything they can to keep our employees and our guests safe, and this is just yet another day, another chapter of crap we have to go through on a daily basis."

Lewis, Rankin, and her daughter were arrested and charged with assault and criminal mischief.

The hostess was taken to the hospital.

The owner of Carmine's now joins other restaurants around the city in raising concerns about the enforcement of the vaccine mandate. They've also hired private security to stand at the hostess booth for the weekend.

The women were given desk appearance tickets.

ABC13 tried to track down all three women to get their side of the story. Nobody answered the door at the homes of Lewis and Tyonnie Rankin. However, 44-year-old Kaeita Rankin, did answer the phone.

In the phone call with ABC13, the elder Rankin said that she was innocent and did not attack anyone. She said she wanted to tell her side of the story, but wanted to consult with her attorneys first. She would not name her attorney.

New York City's indoor vaccine mandate went into effect in August, making it the first major U.S. city to require proof of COVID-19 vaccination in order to eat or drink inside bars and restaurants.

The new requirement, which applies to everyone 12 and older, doesn't just apply to dining, but includes nearly every public indoor activity, from gyms to bowling alleys to movie theaters to concert venues and more, according to the city.

Acceptable forms of vaccination proof include the NYC COVID Safe app, the state's Excelsior Pass, a Centers for Disease Control and Prevention vaccination card (or photo of the card), an NYC Vaccination Record or for those who got vaccinated outside of the New York, an official immunization record.

The city began enforcing the rule on Sept. 13, fining businesses that don't comply.