'This is the culprit': Water line shows damage from E. Loop flood 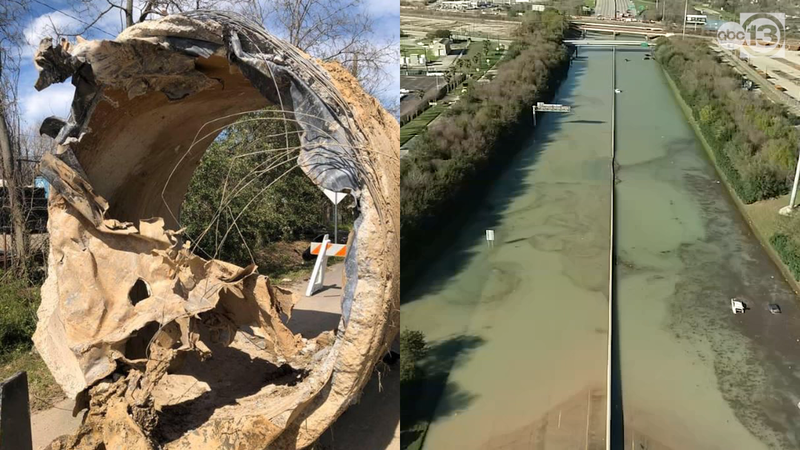 HOUSTON, Texas (KTRK) -- Houston Public Works offered a first look at the damaged 96-inch water main that broke and caused the East Loop to flood and a city-wide water emergency that lasted over a couple of days.

HPW's Twitter account posted photos of the broken line as well as the one that is replacing it.

"This is the culprit that caused the boil water notice & the new water line being installed," Houston Public Works tweeted.

The posting also thanked those who helped fix the break.

This is the culprit that caused the boil water notice & the new water line being installed. 🙏Our #MondayMotivation is everyone who worked around the clock to help. Thank you @houmayor, @TxDOT, @houstonpolice, @HoustonFire, @HoustonHealth, @MoPD_Houston, @HoustonOEM!💪😀💧 pic.twitter.com/LTbTNmUki8

The water line break last Thursday initially caused water to spew across mainlanes of the East 610 Loop near Clinton. Drivers caught in the flood retreated to the roofs of their vehicles to be rescued.

The break then caused lowered water pressure and a boil water notice to up to half of Houston. Schools, city government buildings and businesses were forced to close early Thursday and throughout Friday as a result.

The boil water notice lasted into Saturday as workers tried to control the situation.

According to officials, the water main was already leaking, but soil had kept the line from bursting until last Thursday when a contractor performed exploratory work. The soil was moved during the work.

13 Investigates found the pipe was first put on line in 1990 and it had 20 years of service life left based on American Concrete Pipe Association standards.

As of Monday afternoon, HPW expected to complete repair work on the line by the same evening. Workers are welding and grouting three large pipe pieces extending about 30 feet.