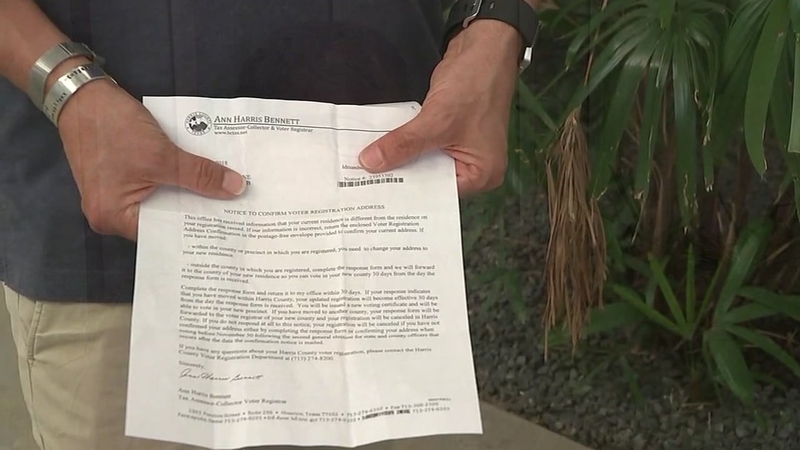 HOUSTON, Texas (KTRK) -- With midterm elections right around the corner, there are thousands of voters confused about their voting status right here in Houston.

When Lynn Lane went to the mailbox last week, he almost didn't open his mail. Now, he's glad he did.

"For some reason, I decided to open the letter. When I opened it, it said if I didn't respond to this letter within 30 days, my voter registration would be deleted from the rolls," he explained.

The letter Lane is referring to was sent to him and thousands of others in Houston. On July 30, a private citizen filed a challenge, asking the Registrar's Office to verify the voters' addresses.

Section 16.092 of the Texas Election Code allows citizens to do so as long as they have "personal knowledge" that there could be a problem.

"One of the things that's frustrating to me is that I've lived in my residence for five years. I voted every election, every bond issue, every primary, so there's never been a lapse in my voter registration. And so there's no reason to challenge me," Lane continued.

In a statement, HCRP said: "We will not be intimidated. It is inexcusable that Democrat Ann Harris Bennett failed to follow the law. She should not have suspended voters' registrations. And the outrageous doxing and threats against Republican volunteers by leftists only hardens our resolve to fight their dirty tricks."

The Harris County Democratic Party believes this is a blatant act of voter suppression and an old tactic to frighten voters in a heavily Democratic, minority neighborhood.

"If it is a widespread practice, it's something that's pretty tragic. I am aware of some residents here in Third Ward getting some of those," voter Cleve Tinsley said.

Lane agrees. He says this is a big mess that could unfairly deter people from going to the polls.

"It is definitely about voter suppression. It feels incredibly sided and crooked."

If you got one of the address confirmation letters, don't panic. The county attorney's office says it's in the process of reviewing the challenge, to see if it's even valid. If they find it's not, everyone will get a correction letter. You can still go vote this weekend and in November. Don't stay at home. You'll just be asked to fill out a form at your polling location to confirm your address.