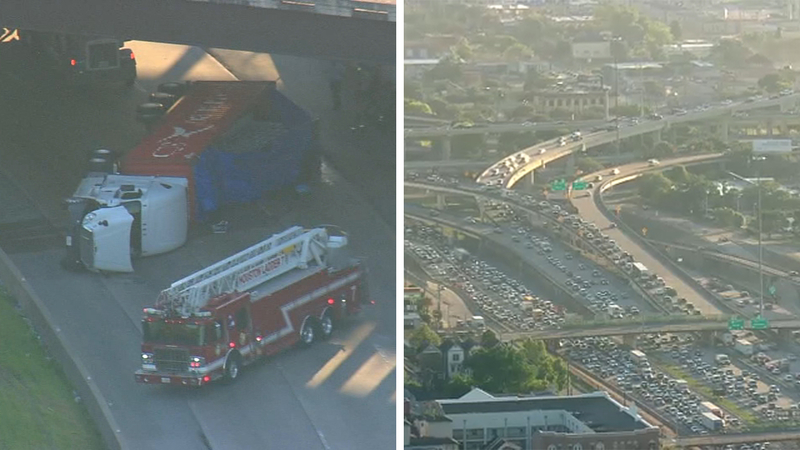 HOUSTON, Texas (KTRK) -- A semi on its side underneath an overpass caused backups for hours during the morning commute on the Southwest Freeway outbound at Highway 288.

SkyEye was over the flipped semi around 6:50 a.m., before police or the fire department had arrived.

Traffic came to a standstill and cars were backed up for miles during the Friday morning commute.

The semi wasn't flipped upright until after 10 a.m. Crews worked to clear the crash and reopen the roadway after all lanes were blocked for over four hours.

"I've been sitting in traffic for like two hours now... from Kingwood," one frustrated driver said.

"It's normally not like this. It's normally free-flowing in this direction at this time," another driver said.

Traffic was diverted off of the southbound lanes of US-59 onto the SH-288 ramp before the roadway finally reopened just after 11 a.m.

The driver of the semi told ABC13 he believes the crash was caused by the load being packed incorrectly.

He explained that the cargo loads usually come from overseas and are already locked by the time they are put on the back of the trucks.

He said he could feel the load shifting and that's when the truck overturned.

Thankfully, the driver was uninjured. He was able to escape through the front windshield that popped out.

He was hauling some type of machinery, and lost that load, authorities said.

ABC13 has real-time traffic data to help you navigate Houston's roads and avoid traffic delays.
Sign up for traffic alerts that are sent straight to your phone through our ABC13 app. Manage your notifications from the settings tab.