Barge crash at I-10 bridge leaves residents stuck at home 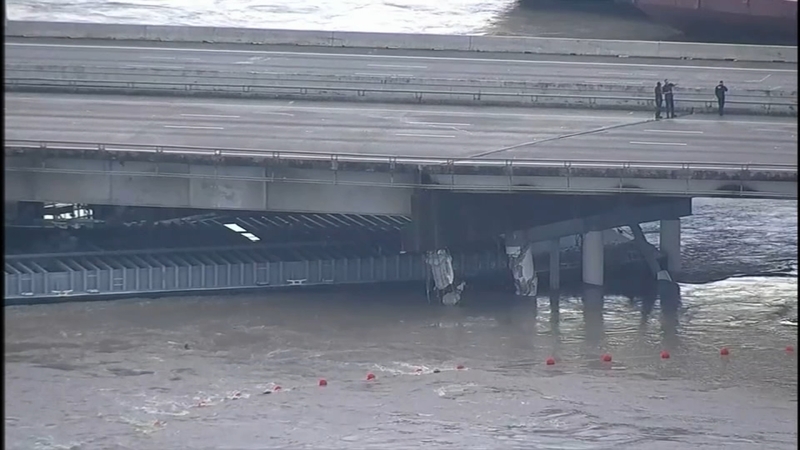 Residents stuck at home after barges crash into I-10

BAYTOWN, Texas (KTRK) -- Barges crashed into I-10 over the San Jacinto River, causing a shutdown of the major thoroughfare Friday morning. It's something people in the West Meadows neighborhood say they've seen before, and they're fed up.

Nine barges broke free and two of them, owned by Canal Barge of Louisiana, crashed into the I-10 bridge. Crews closed down traffic in both directions.

SkyEye gave us a first look at the damage to the I-10 bridge after barges hit it in the swollen San Jacinto Rver.

"All of us at Canal Barge Company fully understand the magnitude of what has occurred in the wake of Tropical Storm Imelda, and the concern and inconvenience this incident has caused to local residents, as well as the impact of the incident in the marine traffic here in Houston," said Joe Tyson, senior vice president of operations for Canal Barge Company in a press conference Friday afternoon.

A similar barge crash happened back in February, leaving some lanes of the interstate closed for several weeks, residents said.

"If there's a true emergency, God forbid it happens, we're going to be stuck in here with no way for them to come get in to us," resident Jennifer Allen said.

It's not clear when the bridge will reopen, and SH-225 is recommended to use as an alternate route.

The Harris County Toll Road Authority says that tolls will be waived at the Sam Houston Tollway Ship Channel Bridge due to the closure.

"We are literally an island, cut off out here in east Harris County," resident David Schaffer said. "They constantly rebuild this bridge so flat, with pylons so narrow together. Why don't they go by and arch the bridge up and widen out these pylons?"