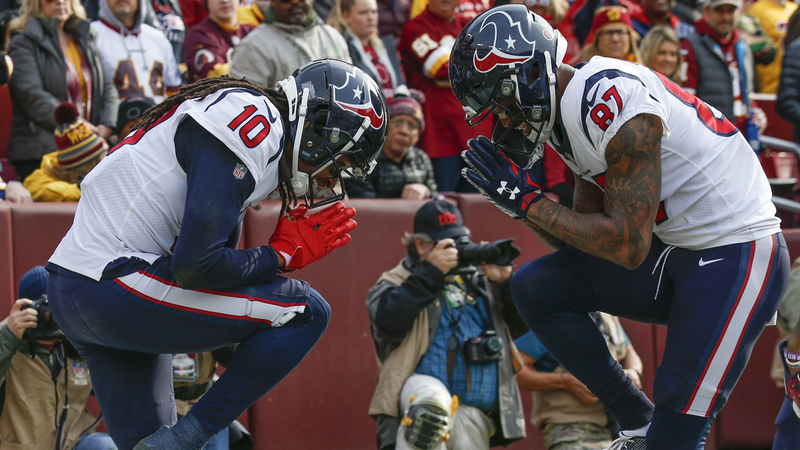 LANDOVER, Maryland -- Justin Reid intercepted the ball in the end zone and saw nothing but green grass in front of him.

"I saw the daylight and I have to hit it," Reid said. "I wasn't going to let anyone stop me."

Reid's 101-yard interception return touchdown was the big play Houston needed to overcome a mistake-prone Deshaun Watson and beat the Washington Redskins 23-21 on Sunday, tying the franchise record with their seventh consecutive victory.

From a gruesome , season-ending injury to Redskins quarterback Alex Smith to three turnovers, it wasn't pretty, but the Texans (7-3) became the first team since the 1925 New York Giants to win seven in a row after starting 0-3.

"With this team, you never know where the play's going to come from," defensive end J.J. Watt said. "You never know who's going to make it - offense, defense, special teams - but you've got to find a way. For the seventh time, we found a way."

While Watson was 16 of 24 for 208 yards, a touchdown and two interceptions, Smith broke his right tibia and fibula on a sack by Kareem Jackson midway through the third quarter and will require surgery. Smith's right leg turned the wrong way in eerily similar fashion to Joe Theismann's broken leg on a Lawrence Taylor sack exactly 33 years ago to the day.

Former Texas Longhorns quarterback Colt McCoy replaced Smith and threw for a touchdown pass and led a long scoring drive for Washington (6-4), which likely will have to rely on the journeyman quarterback the rest of the way. When a McCoy-led drive finished with an Adrian Peterson touchdown to put the Redskins up 21-20 early in the fourth quarter, it was the first lead change in a game involving the Redskins all season.

Houston went ahead for good on a 54-yard field goal by Ka'imi Fairbairn, who missed a 44-yarder earlier. The winning streak stayed alive when Redskins kicker Dustin Hopkins missed a 63-yard field-goal attempt with 3 seconds left.

"We just have belief," Watson said. "Everyone keeps fighting. No one is doubting each other. Regardless, we try to play complementary football, but when the offense needs the defense to help us out, they do that and vice-versa."
Report a correction or typo
Related topics:
sportshoustonnflhouston texanswashington redskins
Copyright © 2022 by The Associated Press. All Rights Reserved.
TOP STORIES
Timeline breaks down Uvalde shooter's movements day of massacre
TX school shooting leaves at least 19 children, 2 adults dead
2 dead, suspect barricaded in NW Harris County, sheriff says
Uvalde school shooting: What we know about 19 kids, 2 teachers killed
Beto O'Rourke confronts Texas gov. at Uvalde shooting press conference
Houston mayor after shooting in Uvalde: 'Our values are messed up'
HISD staff encourage talking with kids about Uvalde tragedy
Show More
Where do Texas gun laws stand?
Mother of Houston Olympic champion receives donated food truck
Major crash shuts down NB lanes of Gulf Fwy at FM 1765
More firearm dealers than mental health providers in Uvalde
Here's what to know about NRA meeting in Houston
More TOP STORIES News