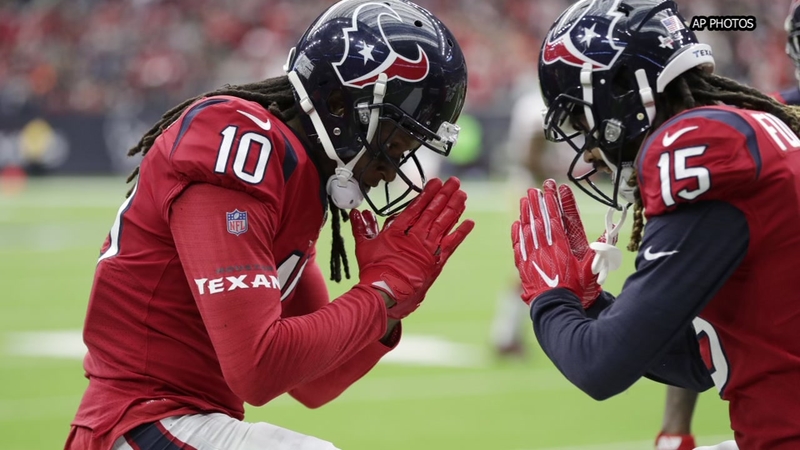 HOUSTON, Texans (KTRK) -- Jimmy Garoppolo threw for a career-high 334 yards and a touchdown to help the San Francisco 49ers to their second straight win, 26-16, over the Houston Texans on Sunday.

Garoppolo again showed that he could be the answer for the 49ers (3-10) at quarterback, going 20 of 33 in his second start for the team. Acquired before the trade deadline from New England, Garoppolo threw for 293 yards in his debut with the team last week to help the 49ers to a 15-14 win at Chicago.

The game was tied when he found Garrett Celek on a 6-yard touchdown pass with about two minutes left in the third quarter to make it 23-16. Celek had a big play earlier in that drive on a 61-yard reception on third down.

DeAndre Hopkins had 149 yards receiving and two touchdowns, but lost a fumble in the fourth quarter with the Texans down by 7 . San Francisco added 41-yard field goal after that to secure the victory.

T.J. Yates threw for 175 yards and two touchdowns after Tom Savage left with a concussion in the second quarter. Texans (4-9) lost their third straight and sixth in seven games.

Savage was injured when he was driven to the ground on a hit by Elvis Dumervil with about nine minutes left in the second. Replays showed Savage looking dazed after his head hit the ground with both of his arms lifted upward shaking.

Savage tried repeatedly to enter the game on the next series. But a team official kept grabbing Savage's jersey and finally his arm and pulled him away from the field. He then could be seen arguing with that person and the team's trainer before being escorted to the locker room.

Yates, who hadn't appeared in a game since Nov. 16, 2015, was signed last month after Deshaun Watson went out with a knee injury. Houston went up 16-13 when Hopkins grabbed a 29-yard touchdown reception on the Texans' first drive of the second half.

The 49ers took a 10-3 lead when Carlos Hyde ran two yards for a touchdown with about 2 1/2 minutes left in the first half.

Yates connected with Hopkins for a 7-yard touchdown on Houston's next drive, but the kick failed to leave Houston down 10-9.

Robbie Gould added a 35-yard field goal at the end of the second quarter to leave San Francisco up 13-9.