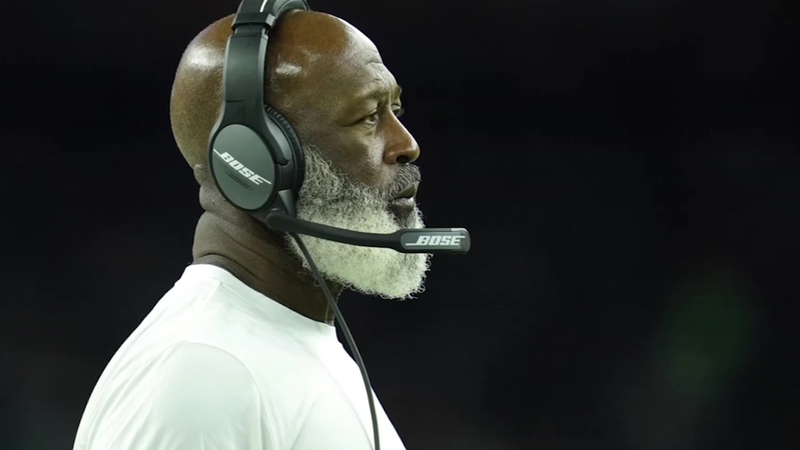 Texans questioned on timing and reasoning for hiring of Lovie Smith

HOUSTON, Texas (KTRK) -- The abrupt hire by the Houston Texans of Lovie Smith for their new head coach left a number of people questioning the reasoning and timing of their decision.

A number of fans and analysts believe the last-minute switch comes in response to the controversy surrounding diverse representation among head coaches in the NFL.

"Given the context, I would be remiss if we didn't talk about the broader context here and I think it's the right move. It's unfortunate, but we need to unpack why we got to this place, unless we understand that there's going to be a large enough contingent out there that believes this is an affirmative hire action," said sports analyst Spencer Tillman.

"I just think that's just a very reactionary type of move," said Texans fan, Richard Smith. "Lovie Smith's name (has) never came up in anybody's hiring list anywhere, you know? So that's not me saying 'I don't like Lovie Smith.' Well, nowhere did we talk about Lovie Smith and now that's the coach you hired."

The hiring came only a few days after former Miami Dolphins head coach, Brian Flores filed a lawsuit against the NFL for alleged racial discrimination. Flores was also a contender for the Texans' head coach opening.

The lawsuit alleges that the league has discriminated against Flores and other Black coaches for racial reasons, denying them positions as head coaches, offensive and defensive coordinators and quarterbacks coaches, as well as general managers. He was surprisingly fired by the Dolphins in January, despite a 9-8 season, capped off by a seven-game winning streak that nearly propelled the team to the playoffs.

"Its 32 owners - none of whom are Black - profit substantially from the labor of NFL players, 70% of whom are Black. The owners watch the games from atop NFL stadiums in their luxury boxes, while their majority-Black workforce put their bodies on the line every Sunday, taking vicious hits and suffering debilitating injuries to their bodies and their brains while the NFL and its owners reap billions of dollars," the lawsuit read in part.

Flores issued a statement through his legal team applauding the Texans for hiring a Black man, but questioned why he wasn't offered the job.

"We would be remiss not to mention that Mr. Flores was one of three finalists for the Texans' head coach position and, after a great interview and mutual interest, it is obvious that the only reason Mr. Flores was not selected ... was his decision to stand up against racial inequality across the NFL," according to the statement.

"Well, you'd have to be stupid to think it didn't play a role. If you were suing KTRK's parent company and then you applied for a job. Would they hire you? Of course not. If I was suing the Hearst corporation, would the Chronicle hire me? Of course not," he said. "Brian Flores has said he knows he sacrificed his career in the NFL because his lawsuit is trying to get every owner to open up his books, expose his emails, his text messages, and direct messages."

Experts said there's no question that Smith is qualified and deserving. He already had two former head coaching gigs under his belt. He served as the head coach for the Chicago Bears for nine seasons, taking the team to the Superbowl in 2006. He then coached the Tampa Bay Buccaneers for two seasons until 2015. He then spent 2016 to 2020 as the coach at Illinois.

Most recently, he spent the 2021 season as the associate head coach and defensive coordinator for the Texans. Some wonder why he wasn't considered for the head coaching position in the first place, while other candidates were being interviewed for weeks. Houston also considered Hines Ward, Josh McCown, and Joe Lombardi.

"It was a huge surprise. And I wondered early on why they didn't at least give Lovie an interview," said McClain.

The Texans had been criticized by some in the media this week for even considering McCown for the position since the 42-year-old former NFL quarterback has never coached at any level aside from volunteering with his son's high school team. McCown spent part of the 2020 season on Houston's practice squad before retiring following a 17-year career.

Tillman and McClain said although the optics look bad, they hope fans understand Smith may be the best person to help the Texans bounce back from years of setbacks. The team is in the process of a complete rebuild after trading or releasing almost all of its top players in the past couple of years. The Texans went 4-13 last season, in a year when star quarterback Deshaun Watson did not play after a trade request and amid 22 lawsuits alleging sexual harassment or assault.

After Smith's hiring is completed, the Texans will continue an offseason where they are expected to finally trade Watson. They have the third overall pick in the draft after not having a first-round pick since 2019, and could acquire more high draft picks if they're able to trade Watson.

"There will be some who are not as steeped in an NFL legacy and where we come from, that will say that this was a permanent higher action and totally discredit a guy who has a resume that's impeccable with respect to experience," said Tillman. "No matter how ugly it may look right now, getting your hands on a coach of a Lovie Smith skill at this point, the Texans win in that regard."

"For a team that is still in a rebuilding mode, not gonna be very good for another year or two. I think he is a steady, experienced man, who's probably going to be ideal for the situation," said McClain.

Smith is the third Black coach in a row who's been hired as the head coach for the Texans, which is an extremely rare occurrence in the NFL. It started when Romeo Crennel became interim head coach in 2020, when Bill O'Brien was fired after losing the first four games of that season. David Culley then took over, but was fired after one season in 2021.

"I have so many friends, family, teammates and coaches to thank for supporting me and helping me continue to do what I love, which is teaching and developing players," Smith said in a statement. "I understand the responsibility I have to this organization and this city to develop a championship-level program. I'm ready to get to work and build it together."

All of Houston's major sports teams, including the Rockets and Astros, are also led by Black coaches. But when it comes to representation in the rest of the country, Smith will be only one of two Black NFL coaches in a league where about 70% of its players are Black.