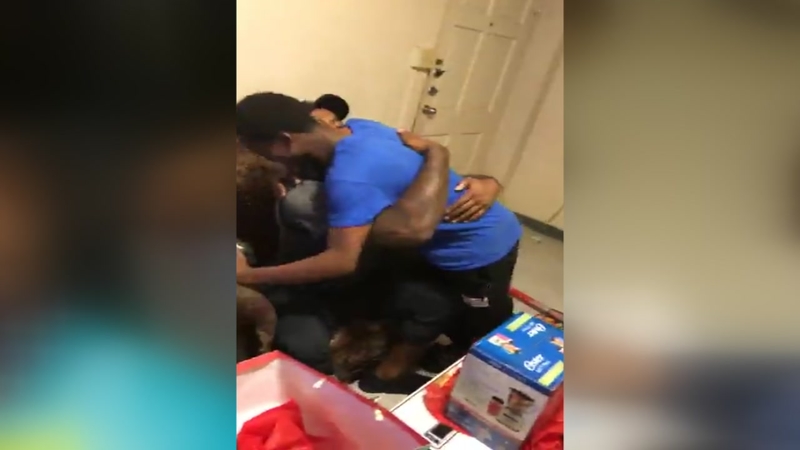 HOUSTON, Texas (KTRK) -- It's the season of giving and creating memories that will last a lifetime. Houston Texans star running back Lamar Miller did just that Wednesday for two families across the Houston area.

Miller, a star on football's biggest stage, surprised the families with gifts -- including a family still displaced by Hurricane Harvey. Since Harvey, they have been living with another family member with 11 people in total inside the home.

The family has also faced hard times trying to save due to other financial obligations and hardship.

"I want to tell you Merry Christmas and I appreciate you guys," Miller said.

From a PlayStation 4, shoes, signed football jerseys, and tickets to the Christmas Day matchup against the Pittsburgh Steelers, it was evident that each child and their parents were thankful for Miller's generous gifts.

"Thank you," said one of the boy's as he wiped away tears.

For the second family, life in Houston's Fifth Ward has also been met with its own challenges -- including financially. The single-parent home is comprised of five children, with ages ranging from 10 to 24 years old.

Merci, a senior at Wheatley High School, has used life's challenges to power him ahead and learned to never use them as excuses. Recently, he got accepted to Texas A&M University.

His face gleamed from ear-to-ear when he unwrapped a present with a new pair of Beats wireless headphones inside.

"Thank you, thank you," Merci said.

He then gave Miller a big hug to thank him.

"I've been wanting these a long, long time," Merci added.

Behind the smile of each young man, you'll also find families that will always remember the moment Miller made some of their Christmas wishes come true.

"Many of the young men in my mentoring program come from families who don't have a lot. While the Christmas time can be joyous for some, for many it can also be a reminder of their struggle and the things they don't have. I'm thankful for Lamar's support and his selfless, willingness to bless others," Glover said.

Indeed, that's what the Christmas season is all about.