Texans' big win in Kansas City made bigger with this stat 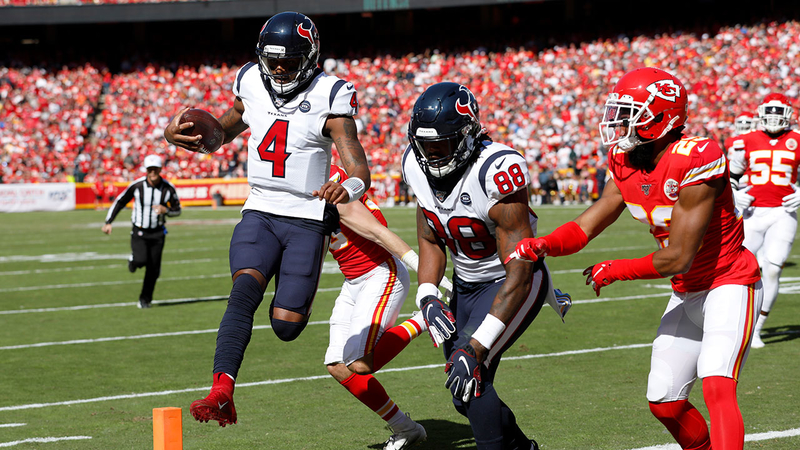 Celebrate the Texans win with these freebies and deals

KANSAS CITY, Missouri (KTRK) -- The Houston Texans may have to send a "thank you" basket to their AFC South rivals, the Indianapolis Colts.

A week after the mighty Kansas City Chiefs, buoyed by reigning MVP Patrick Mahomes at quarterback, collected an unlikely loss against Indy, the Texans and their running game pounded the K.C. defense on Sunday. Houston improves to 4-2 after the Texans' 31-24 win.

SEE ALSO: Celebrate the Texans win with these freebies and deals

Carlos Hyde scampered for 116 yards and a touchdown.

Deshaun Watson scored two touchdowns on the ground and another in the air.

In all, Houston collected 472 yards of total offense after the comeback win. At one point, the Texans were down 17-3.

What's most remarkable, Houston's offensive line allowed no sacks of Watson for the second straight game, which was an edict the team wanted to address in the offseason.

The Texans, who are now on a two-game winning streak, head to Indianapolis in a division battle next Sunday.

This was fun. Thanks KC. #Texans pic.twitter.com/804cvvUK6a

For years with the #Texans it’s always been Yeah, but.... Not this time. They just beat the Chiefs in Kansas City and beat them up to do it. They have an offensive line and an MVP level QB. #HOUvsKC

The #Texans just earned the right to play a MONSTER game next week in Indy. Can’t wait. #HOUvsKC