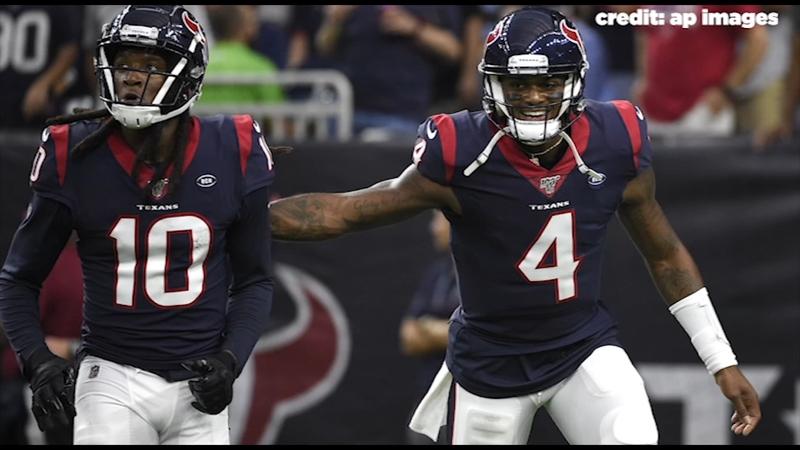 HOUSTON, Texas (KTRK) -- Fans will be happy leaving NRG Stadium, with the Texans coming out on top 30-23 over the Lions.

Deshaun Watson and DeAndre Hopkins both saw action in the first series of the game, with the duo continuing their great chemistry and shaking off some of the rust.

The quarterback and receiver connected on a touchdown in the red zone on the first series of the game that lasted 11 plays.

Watson only appeared for one series, with Webb replacing him after the touchdown drive.

Watson finished the game 5-7 for 60 yards and 1 touchdown.

"Everyone was on the same page, operation was perfect," Watson said post-game.

Whitney Mercilus forced a fumble on the Lions' first series of the game, but it was recovered by the Lions.

After getting the reception, Steven Mitchell Jr. fumbled the ball, which led to a Lions touchdown.

On the next series, Mitchell would redeem himself, snagging a 28-yard reception.

Joe Webb and Jordan Thomas connected on a touchdown on the same series, but a holding penalty negated it. Webb would throw an interception the next play.

It was quite the sequence for Davin Bellamy late in the second quarter. After deflecting a pass from Josh Johnson, Bellamy would then force a fumble and recover it.

Derrick Baity also got an interception with 7 seconds left in the first half.

Webb and Vyncint Smith would connect on a 31-yard touchdown pass following the fumble, giving the Texans a 17-10 lead at halftime.

The Texans opened scoring in the second half with a 27-yard field goal from Fairbairn.

On that same series, tight end Jerell Adams stiff-armed a player, staying on his feet and gaining extra yardage. You might see that on SportsCenter.

Derrick Baity went down with an injury halfway through the third quarter after the Lions connected on a deep pass. Baity was able to walk off the field under his own power.

The Lions would score on that same series in the red zone and cut the Texans' lead to 4. Credit to the Texans' defense for stopping the two-point conversion.

Buddy Howell extended the Texans lead to 27-16 with a 1-run touchdown that capped off a 13-play, 91 yard drive.

The Texans were able to hold it down defensively late-game, stopping a Lions comeback drive attempt just as the two-minute warning came.

Derrick Baity swatted away the ball in a Hail Mary attempt on the final possession of the game.

It's going to be a Texas shakedown in week 3 of the preseason, as they travel to Dallas and face the Cowboys.

With Week 3 of preseason usually being the "dress rehearsal" for teams, Bill O'Brien said this upcoming week is a big one for the Texans.