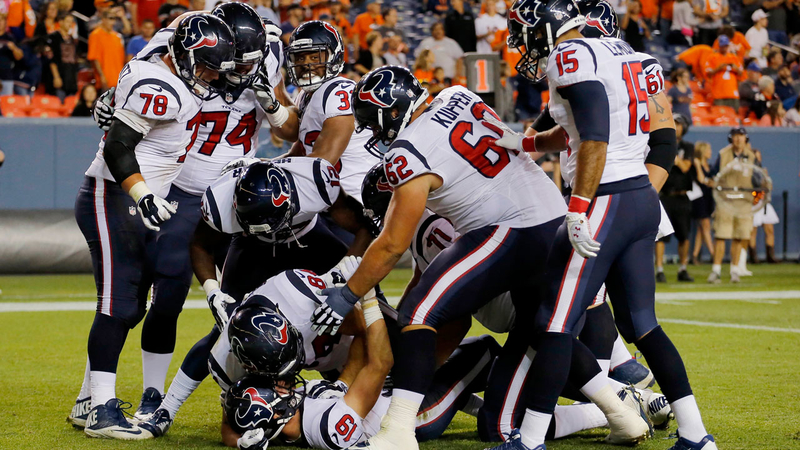 DENVER, CO -- Rookie quarterback Tom Savage led the Texans on a game-winning drive in the final minutes Saturday as Houston topped Denver, 18-17, to improve to 2-1 on the preseason.

With Denver leading 17-10, Savage drove the Texans 74 yards on nine plays, ending with a Savage to Ryan Griffin 31-yard scoring strike, followed by a Savage to Travis Labhart two-point conversion to give Houston the lead.

Peyton Manning and Emmanuel Sanders found their rhythm after an early miscue, connecting for two long touchdowns in the final 67 seconds of the first half of the Denver Broncos' 18-17 preseason loss to the Houston Texans on Saturday night. 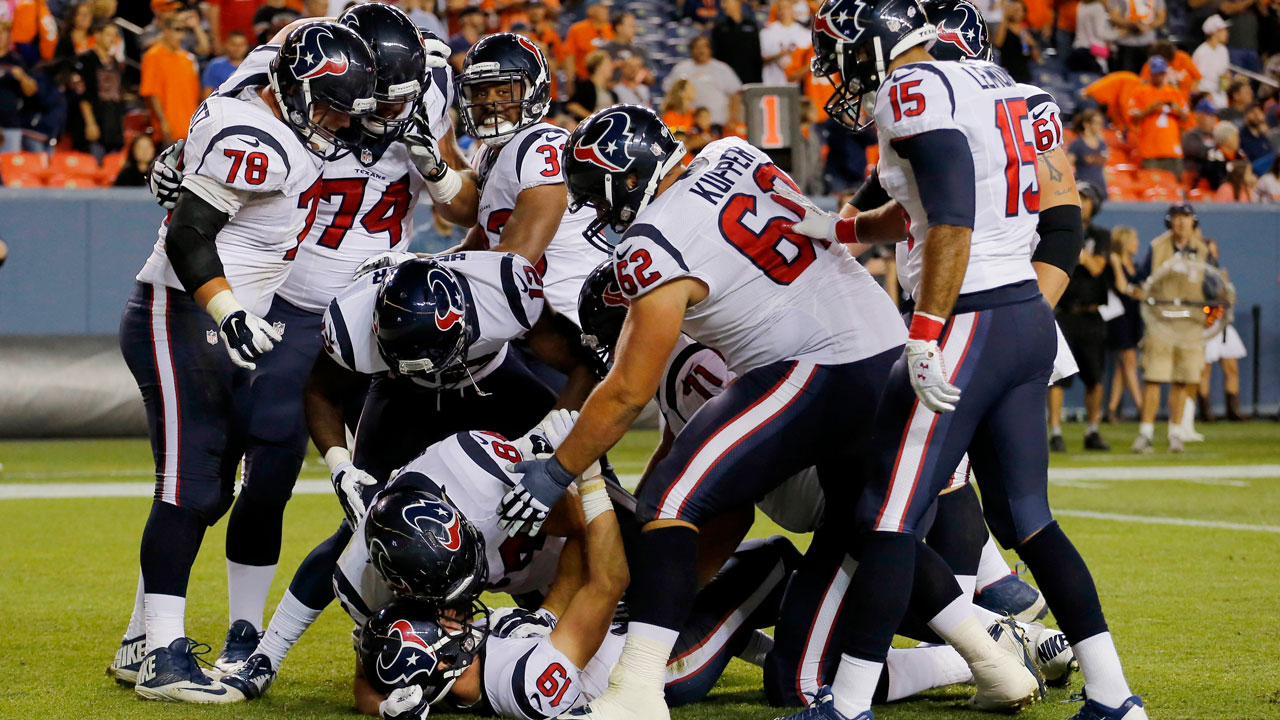 Texans 18, Broncos 17 (F)
Tom Savage led to the Texans on a game winning drive in Denver Saturday as Houston topped the Broncos, 18-17
Manning was whistled for taunting following his second TD toss to Sanders. The Broncos said that was apparently the first such penalty in the five-time MVP's career.

Manning ran up to D.J. Swearinger and gave an earful to the Texans' swaggering second-year safety who leveled Wes Welker with a forearm to the face one play earlier. Welker, who has a history of head injuries, was evaluated for a possible concussion.

Swearinger was also at the center of several skirmishes during the teams' three days of intense joint practices during the week.

With all that work they put in together, both teams treated this third preseason game more like a second exhibition, with many stars getting cameos at best. Neither team sent front-line players out to start the second half for what is traditionally the final regular-season tuneup.

Texans DE J.J. Watt played just part of the first series before donning a baseball cap for the rest of the night, and Denver LB Von Miller played a single series in his first game since tearing his right ACL on Dec. 22. And that was more than fans got to see of top overall draft pick Jadeveon Clowney, who sat this one out after a helmet-to-helmet hit Wednesday.

Running back Montee Ball started for Denver 19 days after his appendectomy and had four runs for 13 yards and four receptions for 21 yards on Denver's opening drive. That series ended with Matt Prater's 32-yard field goal.

Sanders, who practiced just once since the Broncos' Aug. 7 preseason opener because of a nagging thigh injury, was targeted eight times by Manning and caught five passes for 128 yards and the two TDs.

Manning texted Sanders on Wednesday night telling him he'd better get back in the lineup so they could work on their timing. It was evident all that time off hurt their rhythm when Sanders ran a bad route and backup cornerback A.J. Bouye made the interception at midfield early in the second quarter.

That led to Jonathan Grimes' 1-yard run that gave Houston a 7-3 lead.

Sanders made up for his blunder when he zipped past Bouye and strong safety Eddie Pleasant to haul in Manning's 67-yard touchdown pass with 1:07 left in the first half.

After the Texans went three-and-out, Manning drove the Broncos 64 yards in three plays, hitting Sanders with a 29-yard TD strike :05 before halftime to put Denver up 17-7. Again, it was Bouye and Pleasant in coverage.

This time, Manning skipped the celebration in the end zone and instead took the opportunity to say something to Swearinger near Houston's sideline. Afterward, Manning spun and jogged to his sideline, where he filled in Denver cornerback Aqib Talib on the exchange.

Manning finished 21 of 27 for 243 yards. Texans quarterback Ryan Fitzpatrick was 10 of 17 for 80 yards with no touchdowns or interceptions.

Randy Bullock made a 24-yard field goal for Houston. Both Prater (49) and Mitch Ewald (36) missed field goals that would have given Denver a bigger cushion.