'Battle of Texas' comes down to overtime as Texans defeat Cowboys 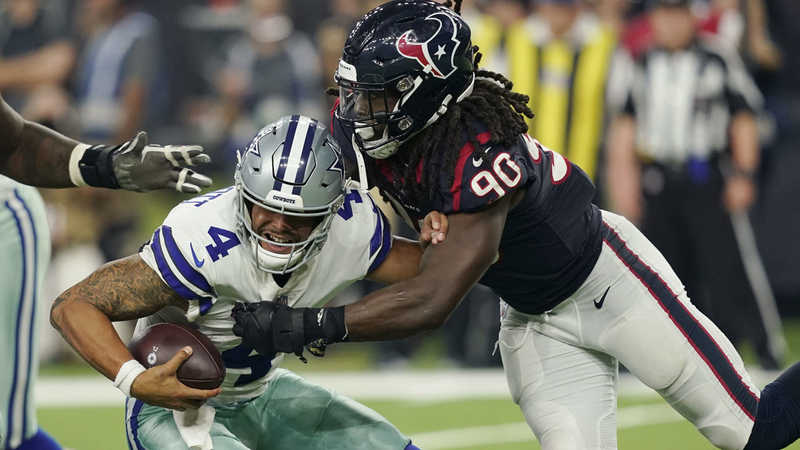 COME AND TAKE IT: Texans take down Cowboys in overtime

HOUSTON, Texas (KTRK) -- Houston and Dallas added another chapter to their in-state rivalry on Sunday night, as the Texans defeated the Cowboys in overtime, 19-16.

Both teams are arguably having forgettable seasons, but the Texans winning against their I-45 neighbors was a much needed step forward.

Offense was at a premium early on for both teams.

Dallas struck first with a pair of field goals from Brett Maher, giving the Cowboys a 6-0 lead in the first quarter.

Deshaun Watson answered with a 1-yard touchdown pass to Keke Coutee, then followed that up with a 20-yard field goal by Ka'imi Fairbairn to give the Texans a 10-6 halftime lead.

After the break, Cowboys quarterback Dak Prescott found Allen Hurns for a 3-yard touchdown pass to vault Dallas back into the lead, but only temporarily.

Fairbairn responded with another field goal to tie the game at 13 midway through the third quarter.

Both teams exchanged field goals in the fourth quarter, as the 'Battle of Texas' headed uneventfully to overtime tied at 16.

In the extra period, the Cowboys received the ball first, but failed to convert their drive into any points, deciding to punt on a controversial fourth down.

With the ball and 90 yards to the end zone, the Texans did everything they could to make their final drive count.

Watson hit DeAndre Hopkins up the middle for a 49-yard catch on second down, immediately putting the Texans in scoring range.