Houston Texans to play Jacksonville Jaguars in London during Week 9 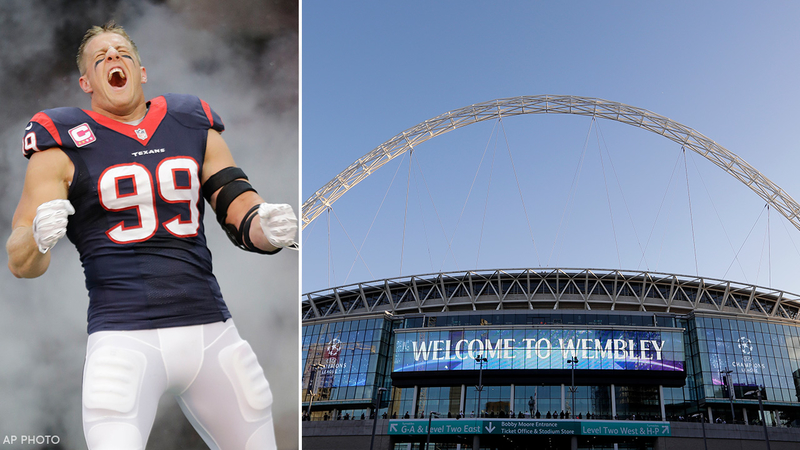 Houston Texans know when they will play first-ever London game

HOUSTON, Texas (KTRK) -- The Houston Texans will take a trip across the pond later this year.

The team announced that it will face division rival Jacksonville Jaguars in London during Week 9 of the 2019 season.

The game will be played on Sunday, Nov. 3 at Wembley Stadium and kickoff is scheduled for 8:30 a.m. CT. The meeting replaces the Texans' annual trip to Jacksonville as the Jaguars will be considered the home team.

For the first time in franchise history, the #Texans will play in London.

See you in the UK, @Jaguars.

The overseas game in the UK will be a first in franchise history for the Texans.

However, the Texans have played outside U.S. territory before, facing the now former Oakland Raiders in Mexico City in 2016.

The Texans' game is one of four NFL match ups set to be played in the UK during the upcoming season.

ABC13's Pooja Lodhia learned American football is also pretty popular across the pond as the Houston Texans plan trip to play in England.

Two of the games will be played at Tottenham Hotspur's new stadium, while two others will be at Wembley Stadium.

Excited to play in front of everyone across the pond! Hopefully Spurs stadium is done by then so we don’t have a schedule conflict at Wembley 😂 https://t.co/7Baf8Yg7i0

The Jaguars will be playing a home game in London for their seventh-consecutive season.

RELATED: Who will the team play at home and on the road next season?
Report a correction or typo
Related topics:
sportshoustonnflhouston texans
Copyright © 2022 KTRK-TV. All Rights Reserved.
TOP STORIES
We have a cold and damp night ahead
Winter blast felt across Texas
Major crash blocks southbound lanes of I-45 in The Woodlands
TxDOT crews prepared as temperatures continue to drop
Digging into the process of rebranding Sugar Land Skeeters
Man killed during attempted robbery of woman he met online, HPD says
Feud over woman led to fight and deadly shootout, family says
Show More
Texas doctor dives into Shark Tank with invention that stops hiccups
Vanessa Guillen legislation celebrated in Houston
Here's how you can break into Houston's aerospace industry
Reporter hit by car on live television, but continued reporting
3 teens found dead in Crosby home identified
More TOP STORIES News