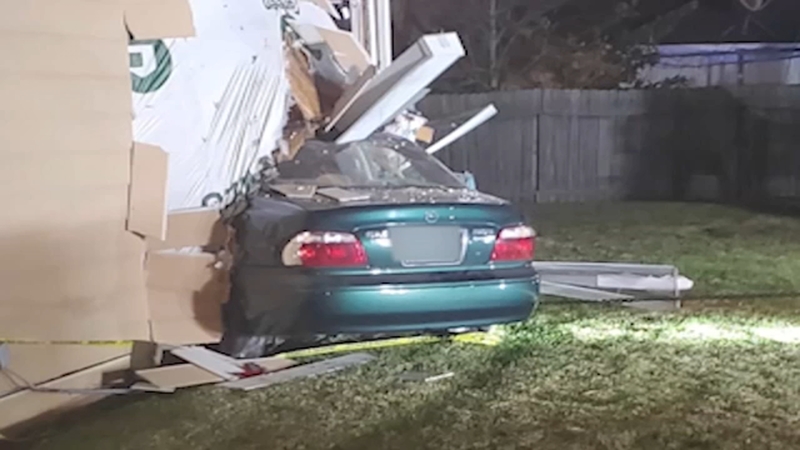 HOUSTON, Texas (KTRK) -- A 78-year-old great-grandmother is recovering from bruises, swelling, and an injured eye after surviving a wild crash on Monday prompted by a shootout in southwest Houston.

The woman, who asked not be identified given the violent nature of what she witnessed, said she owes God all the glory. She spoke with ABC13 Tuesday morning.

Doctors expect her to make a full recovery.

"I never prayed like I did last night," she said. "I'm so thankful for my life, but the main thing that I'm thankful for is that I didn't hurt anybody. Had I hurt those people that live in that house ... they could have just buried me right then and there because I never would have gotten over the fact that I had taken another human being's life."

The woman said when she was walking out of a gas station, she witnessed the violent shooting.

In her attempts to flee the dangerous situation, she said she passed out before coming to inside her car, which had crashed into a home.

"I heard, 'Pow! Pow! Pow! Pow!'" she recalled. "I said, 'Jesus, are those gunshots?' His arm was out stretched. I saw the gun in his hand. I said, 'Jesus, he's shooting a gun.' He was looking directly at me. He's fixing to kill me, because he's going to think I can identify him."

According to the Houston Police Department, 52-year-old Mark Jefferson was parked inside his vehicle at the service station at 7997 W. Airport Blvd. Investigators said a man parked his vehicle next to Jefferson's car. A discussion ended with shots being fired and the suspect fled the scene in a black Chrysler 300.

According to a tweet posted by the Houston Police Department, there was "an exchange of gunfire between two vehicles."

Jefferson is recovering in the hospital with wounds to his abdomen and arm.

The great-grandmother said she wants the gunman to turn himself into police.

Anyone with information on this case is urged to contact the HPD Major Assaults and Family Violence Division at 713-308-8800 or Crime Stoppers at 713-222-TIPS.

Why is Harris County still at COVID-19 threat level red?