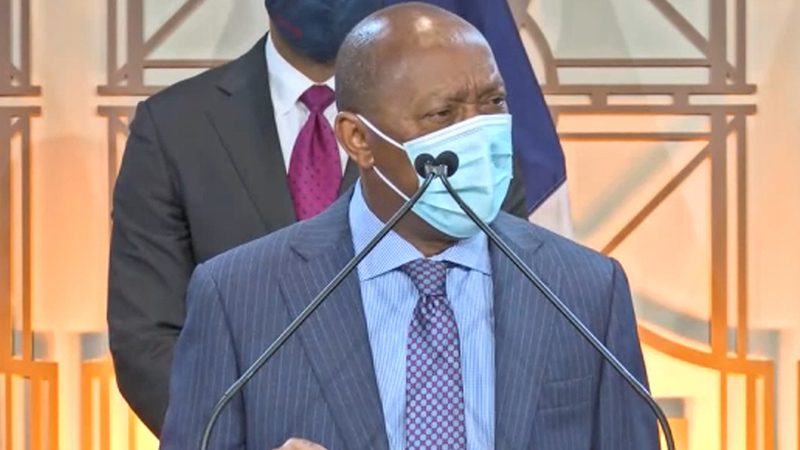 Mayor Turner's emotional moment on saying no to GOP convention

HOUSTON, Texas (KTRK) -- A Harris County judge has denied the Republican Party's request for a temporary restraining order against Mayor Sylvester Turner and the city. The Texas GOP asked the judge for a restraining order which would have forced the city to allow their state convention.

The Republican Party said they expected to lose, "It didn't matter in which court this case landed, we expected a denial from the liberal Harris County courts," said RPT Chairman James Dickey. "We thank them for a speedy denial so we can move forward with the appeal we had prepared."

"RPT will proceed in filing its appeal directly to the Texas Supreme Court given the time sensitivity of the matter as the Convention was scheduled to begin its committee meetings on Monday at the George R. Brown Convention Center," the party said in a statement.

The Texas Republican Party and another group of Republicans filed suits against Mayor Turner and the city for canceling the Texas GOP convention that was scheduled for next week at the George Brown Convention Center.

The Republican Party sued for breach of contract and is asking for a temporary restraining order preventing the city from restricting the convention or "using the virus as a pretext to cancel the convention."

Steve Hotze and four others are suing the mayor, claiming in court documents that Turner's decision is an attempt to silence the Republican Party of Texas.

The plaintiffs argue that, despite issuing formal orders throughout the pandemic, most "ultimately went unenforced, ignored, or even circumvented."

They continue on to argue that Turner only recently started enforcing such orders when it came to the Republican convention.

Turner said that although he has not read and or seen the lawsuit for himself, he believes his actions were justified.

"The reality is that they signed a contract in March that defined this as a pandemic," Turner said. "They are welcomed to go to the courthouse, but I don't know if the court is seeing people in-person."

"His choices with regard to the RPT's Convention are simply opportunistic and are in stark contrast to the treatment of other peaceful, political assemblies during this same pandemic," the court documents read.

They say the same constitutional rights Turner "advocated for" during protests and marches, he is now "quash[ing]."

"For example, for Houston's June 2 organized march to protest the death of George Floyd, Turner gave a press conference to the City of Houston supporting the marches, personally attended, and gave speeches to large crowds, stating only that people 'should wear a mask, carry hand sanitizer, and attempt to maintain social distance,'" the lawsuit states.

They are also seeking "an award of nominal and compensatory damages."

"Look, these are some very serious times, and the safety of the people attending the convention, the employees, their family members, the people in the city of Houston, have their public health concerns," Turner said Wednesday. "First responders, police, fire, and municipal workers will all be in contact or in close proximity to this indoor gathering. Simply, the public health concerns outweighed anything else."

"Where there are provisions that would allow us to cancel this convention - we will exercise those provisions," Turner said. "And the plan is to exercise those provisions to cancel this agreement, this contract, today - to not go forward with this convention."
Report a correction or typo
Related topics:
societyhoustonrepublicanscoronavirus texaslawsuitcovid 19 pandemiccovid 19 outbreakcovid 19
Copyright © 2022 KTRK-TV. All Rights Reserved.
CORONAVIRUS TEXAS
When will COVID-19 fade away? Experts say cases are on the rise
Congresswoman Sheila Jackson Lee tests positive for COVID-19
Texas Medical Center provides final COVID-19 update
Leading Houston voice in pandemic says he tested positive for COVID
TOP STORIES
At least 46 bodies found in 18-wheeler in San Antonio
More heavy rain possible late this week
What's next in the political fight over abortion? | 'It's chaos'
Dog owner charged in deadly northeast Harris County dog attack
Actress Mary Mara dies at 61 after drowning in river: police
Juvenile allegedly sexually abused therapist, could be tried as adult
Residents fight to stop landfill expansion in a historic neighborhood
Show More
Police are searching for shooter who killed 58-year-old pastor
Harris Co. Sheriff Ed Gonzalez withdraws ICE nomination
3 charged with kidnapping 7 victims from Tomball group home
Hearing scheduled that could allow certain abortions to resume for now
Man armed with screwdriver holds 2 hostages at Scottish Rite, HPD says
More TOP STORIES News