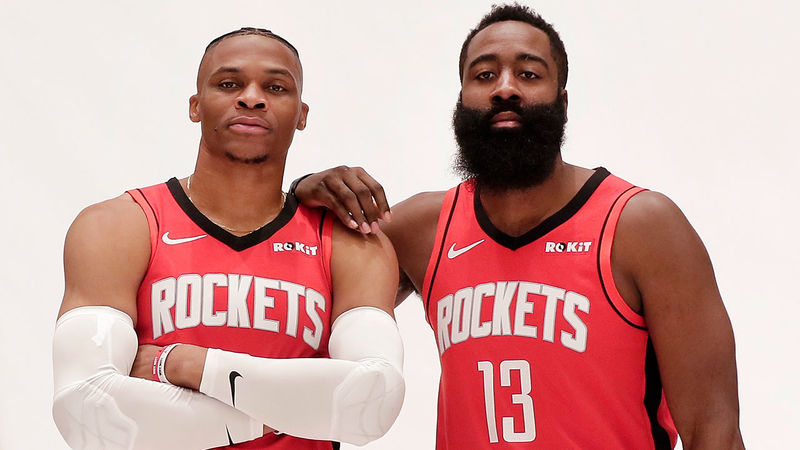 HOUSTON, Texas (KTRK) -- Rockets basketball is back, and two friends and former teammates are reunited for the first time since 2012.

One of the biggest moves this past summer was the Rockets acquiring Russell Westbrook from the Oklahoma City Thunder and shipping out Chris Paul. Westbrook is four years younger than Paul, hopefully re-opening the Rockets title window after a second-round exit last season.

Harden and Westbrook are once again teammates and it seems the two haven't left each other's side since the blockbuster trade over the summer.

The Milwaukee Bucks had the best record in the NBA last season (60-22), and are the first opponent for the Rockets this season. Superstar Giannis Antetokounmpo, also known as the "Greek Freak," won the 2019 NBA MVP over Harden.

Last season left a bitter taste in the Rockets mouth with yet another postseason loss at the hands of the Golden State Warriors. Harden said post-game after their defeat that he knew exactly what needed to be done within the organization.
Report a correction or typo
Related topics:
sportshoustonhouston rocketsmilwaukee bucks
Copyright © 2022 KTRK-TV. All Rights Reserved.
TOP STORIES
'It was like a mad dash:' Clear Creek ISD senior set to graduate
Man dead after being shot during road rage incident, HCSO says
CDC recommends wearing masks indoors, ahead of Memorial Day weekend
Scattered storms move in tonight ahead of front
Murder suspect dead after found unresponsive in cell, sheriff says
Astros fan from Spring celebrates 95th birthday with favorite team
Child hospitalized after found 'unresponsive' at Splashtown
Show More
Runner dies after collapsing at finish line of Brooklyn Half Marathon
Global K-pop sensation Seventeen kicks it in Houston in new tour
'NFTs: Enter the Metaverse' | Trailer
Authorities search ends for man with felony warrant out for his arrest
Early Voting holds off Epicenter to win Preakness Stakes
More TOP STORIES News