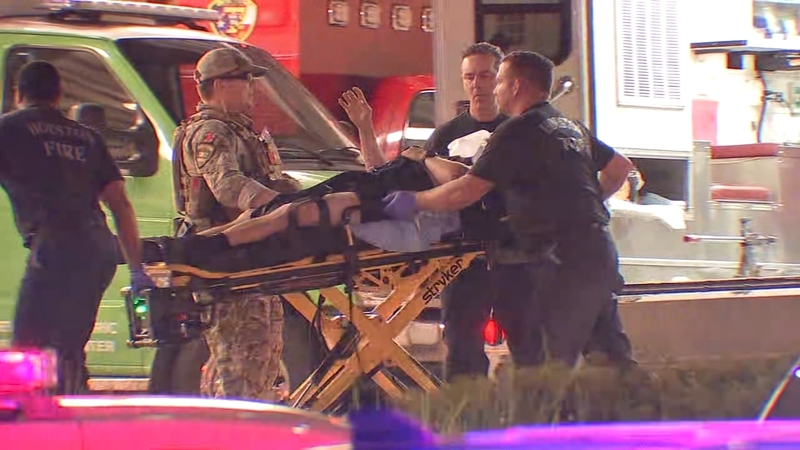 What we know about officer shot in crime spree

HOUSTON, Texas (KTRK) -- Houston Police Chief Art Acevedo asked for the public's prayers as one of his officers recovers from being shot three times in a crime spree that unfolded late Thursday night on the south side.

The 29-year-old officer, who has not been named, was taken into surgery for the gunshot wounds. His condition is not described as critical, but guarded.

Latest Update: Our Officer is out of surgery, currently stable, and he is in ICU. His family wanted to thank our community and the entire country for praying for him. They ask that you please continue to keep him in your thoughts and prayers.

Acevedo shared more details about the officer, saying that he is a 5-year veteran of the force.

As the officer was brought to Memorial Hermann Hospital, ABC13 got video of him moving his arm.

Acevedo, who used to be the police chief in Austin, knew the officer when he was in the state's capital city because the officer graduated from the University of Texas.

"This is close to me. His father is a 42-year veteran of this department, and he talks about the commitment of our men and women, and the history we have of working a great city, for this great mayor and great community and our officers will cross generations, second generations, third generations," Acevedo said.

The police chief also said the injured officer is currently engaged to another HPD officer.

The violence erupted on the same night that Houston hosted the Democratic presidential debate.

Officials say it began with a carjacking at the Valero station at 5820 Scott St. near Griggs Road.

Four black men approached the driver of a 2003 Chevy Tahoe and took the vehicle at gunpoint, Acevedo said.

What they didn't know is the Tahoe was out of gas. When the vehicle sputtered to a stop, police say the four suspects abandoned the vehicle at 6200 Tierwester and fled on foot.

About 10 minutes after the carjacking, Acevedo said the suspects held up a priest in a parking lot on Meriburr Lane.

Acevedo said the men pulled the trigger twice, but the gun jammed. That is when the priest was beaten. The suspects took his cell phone before taking off.

At 10:21 p.m., after receiving two reports of the suspects, officers in an unmarked unit spotted the men on Tierwester, near a Chase Bank.


Officers chased the suspects, still running on foot. About five minutes later, an officer exchanged gunfire with a male suspect. The man was pronounced dead at the scene.

Two of the suspects are in custody. The fourth is still on the run.

Acevedo says as soon as the shooting happened, the SWAT team was able to leave the area of the debate and respond to the shooting.

Both Houston Mayor Turner and Acevedo were on scene. The chief himself gave the officer a word of encouragement.

"The officer was conscious when transported. Reassured him. Made sure you are going to be okay. Being shot doesn't mean you're going to die. Keep your heads about you. Keep your wits about you. Listen to the (doctor). You're going to a med center here that's second to none. In Houston, we've got the best medicine on the planet," Acevedo said.

The chief also expressed his frustration about violence against police officers, saying that he's tired of it and it has no place in our city.

Four carjackers who tried to shoot a priest were met with force, ending in a deadly shootout with officers, police say.