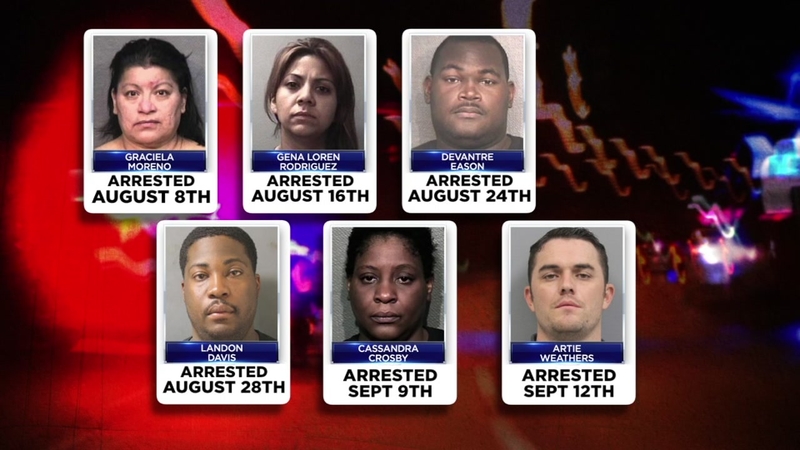 HOUSTON, Texas (KTRK) -- The Houston Police Officer arrested at his child's school for drunk driving had vomit on his shirt and bloodshot eyes at the time of his arrest. That's according to court records reviewed by Eyewitness News.

Wednesday afternoon, Officer Artie Weathers went to Ault Elementary to pick up his child. Court records allege Weathers was swerving in the carpool pickup line and was staggering once he got out.

Weathers was arrested and charged with DWI, but the larger issue may be how many fellow law enforcement officers are facing similar charges.

Since August, six law enforcement officers in Harris County have been charged with DWI. Two out of the six allegedly had a child in the car with them.

The cases are as follows:

August 8th, Deputy Graciela Moreno of the Harris County Sheriff's Dept. was arrested. She allegedly drove her car through a construction zone, leaving 130 feet worth of tire tracks.

August 28th, Deputy Landon Davis of Harris County Sheriff's Dept. was arrested for DWI with a child in his car.

September 9th, Houston Police Officer Cassandra Crosby was arrested after crashing her car. She allegedly admitted to drinking wine, and she had her 13-year-old daughter in the car.

September 12th, HPD officer Weathers was arrested by Cy Fair ISD Police when he appeared intoxicated at his child's school.

In light of so many DWI cases, we asked Houston Police Chief Art Acevedo if there is a larger problem in the department. The Chief released the following statement to Eyewitness News:

"The department has recognized that our workforce is not exempt from the challenges of alcohol and/or drug abuse. As such, from the onset of my appointment as the HPD Chief by Mayor Sylvester Turner, I have taken numerous steps to address this issue. They include written and video statements to our workforce increased expansion for peer support and wellness programs, and have made it clear we have zero tolerance for DWI in our department. No one is exposed more to the dangers and negative outcomes of DWI than first responders and, as such, we will continue to hold ourselves to the highest standards. At the same time, we understand that we employ human beings and will provide our workforce with all the resources available for those seeking assistance."