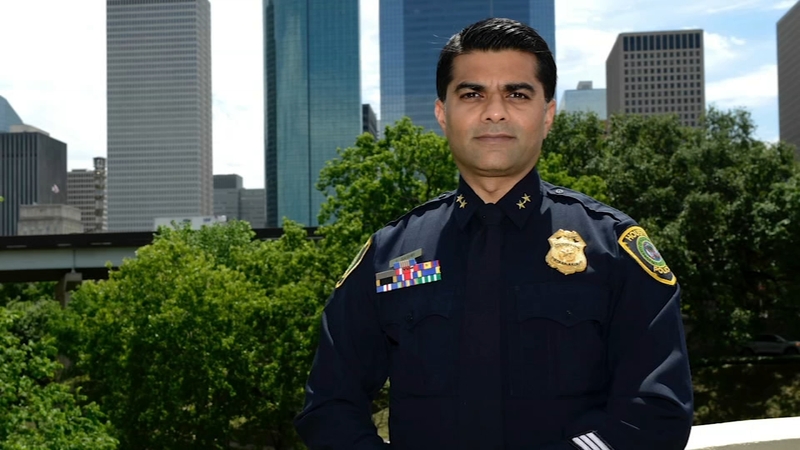 HOUSTON, Texas (KTRK) -- After 20 years with the Houston police, Yasar Bashir has been named the department's first-ever Muslim assistant chief, and one of the first in the country.

He was promoted by Houston's newly-appointed chief Troy Finner.

"[Finner] is creating a command staff that is truly reflective of the community we serve, and that is really progressive," Bashir said.

The assistant chief was born in Pakistan and moved to the U.S. in 1985 with his parents when he was only 8 years old.

Less than a month after he was sworn-in, Chief Troy Finner is laying out his crime strategies and how you can help him bring down crime.

"In the beginning, it was very challenging because I had to repeat third grade. I didn't speak English," Bashir said. "So, I took education very seriously because of that setback I had in my life."

Originally, Bashir went to college to study finance. He said he got three years into his degree, and someone suggested he apply to be a police officer.

"The very first day of the academy, I was like, 'This is my passion. This is where I want to be,'" he recalled. "The job is so fun, so exciting. And you get to make a big difference in the community."

He changed his major and ended up getting his masters in criminology.

"A few years ago, very few individuals from the South Asian community would pick this profession," Bashir said. "Times are changing now."

During his two decades working at HPD, Bashir has been able to patrol the Gulfton area, where he grew up.

He said he's had the opportunity to look out for his community, especially amid the "Stop Asian Hate" movement.

"That is pure, pure evil when you're targeting someone because of the way they look or the way they communicate," said the assistant chief, who speaks four languages.

In the early 2000s, Bashir started working as a bait officer to catch criminals targeting the Asian community.

He went undercover as someone who might seem vulnerable in a sting to arrest jugging suspects. Bashir withdrew money from an ATM and allowed robbery suspects to follow him.

"They thought I was an easy target, but they picked the wrong guy that day," Bashir said. "We ended up catching them."

Bashir said the same passion he had for his job when he first started is the energy he plans to bring to his new role as assistant chief.

He believes he will be able to relate to the southwest Houston community in a unique way and hopes to reduce violent crime.

Since being promoted, the new assistant chief said he has received congratulatory texts from many people, with several expressing that he is an inspiration to them.

"You can have whatever belief system you have," Bashir said. "The point of it is, we want everybody to excel in their profession."