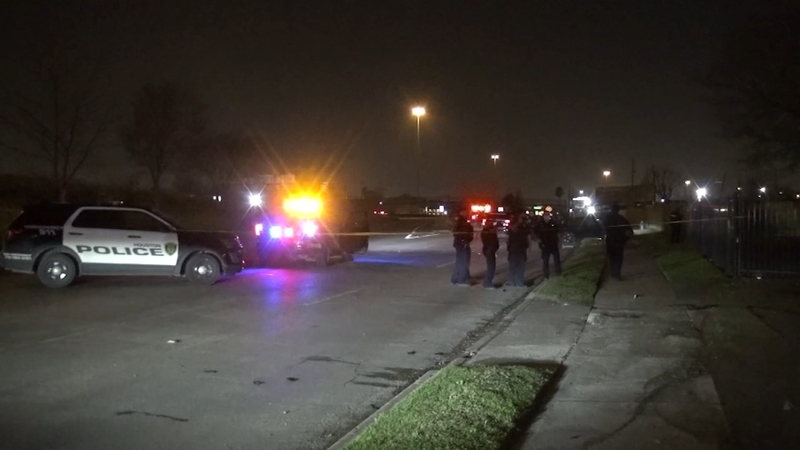 HOUSTON, Texas (KTRK) -- A reckless driver on East Freeway ended up fleeing from police overnight, but not before crashing and exchanging gunfire with officers, according to Houston police.

The driver took off from officers as they tried to pull him over for several traffic violations. The driver lost control of the car and crashed into a pole. As soon as officers approached the vehicle, the man inside started shooting, Houston police said.

The suspect fired several times and an officer returned fire at least once. No one was hit by the gunfire, but an HPD cruiser was hit several times, police said.

An officer was injured during the ordeal by flying glass from gunfire. The injuries to the officer's hand were believed to be minor.

The shooter took off through a neighborhood nearby, but was eventually caught.

Our men and women continue to do all they can to keep our community safe. @houstonpolice will never stop doing our best to protect the people we serve. Very grateful we were blessed and our officers were unscathed. #RelationalPolicing https://t.co/ci1YWPPi9S

Police said they were able to recover the suspect's gun after someone saw him throw it over a fence and called 911, according to Houston police assistant chief Ben Tien.

While the suspect was not identified, Tien said it's believed that the man was out of jail on bond on other felony warrants and has a lengthy criminal history.

The area around I-10 and Wayside was blocked off by officers while the investigation continued Sunday morning.

Sunday's shooting was the fifth incident involving officers in the Houston area so far this year.

On Jan. 26, a Harris County deputy was shot several times while responding to a suspicious person call in north Harris County. The deputy survived and is expected to recover from his injuries.

Thankfully, all of the officers involved in this and other shootings in January were not fatally injured. Here's a quick breakdown of where they happened.

Suspect shoots at Pct. 6 deputy constable up to 8 times during SE Houston chase