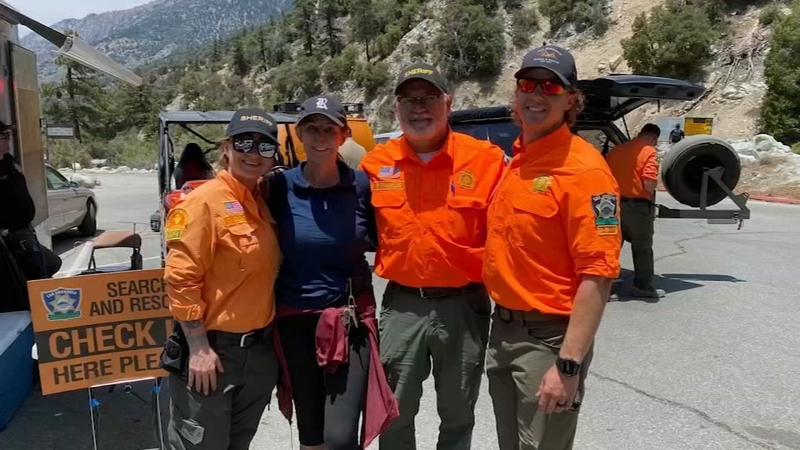 HOUSTON, Texas (KTRK) -- A Houston-area woman is safe after she spent nights on the ground while lost in the mountains of southern California.

"I was training to summit Mt. Whitney. It's the tallest peak in the lower 48," said Peggy Faulk. "I went on the hike with a friend and she is much faster than me, and I said, 'If you want to go on and go.'"

It was supposed to be just another training day for Peggy at the San Gorgonio in California. The plan was to catch up to her friend and meet at the car, but her phone lost track of the trail and she didn't have a backup system - which she said was a big mistake.

"But, I thought, 'Well, I'll just go south.' The altitude affects your thinking, it was so stupid," Peggy said.

A full-on search to find Peggy soon began after she failed to meet up with her friend.

By Tuesday, there was still no sign of Peggy. At that point Peggy's daughter, Alexandra Faulk, hopped on a plane from Houston to California, praying for the best.

"I was absolutely in shock that my mom went missing, because she has gone on a number of hikes out here in California," Alexandra said.

Countless volunteers had searched high and low and just when they least expected it, Franking spotted her just in time.
"When they finally found me, I had been hallucinating for a couple of days," Peggy said. "When I saw people in orange shirts walking I thought, 'Boy, my hallucinations are getting crazy.'"

Peggy, for the most part, was in good shape. What possibly made the difference was that she always carries more water than needed and a lot of snacks.

"We're experiencing an extreme heat spell out here, (and) she was in a pretty exposed area," Franking said. "The fact she was not suffering from dehydration, she was prepared for that."

Peggy said she is extremely grateful for the many volunteers who do this in their spare time and sends her love to her Houston friends who prayed for her rescue.

"No comment," said Peggy laughing. "I think I will get in trouble if I comment. I've been told no more hiking in the future."