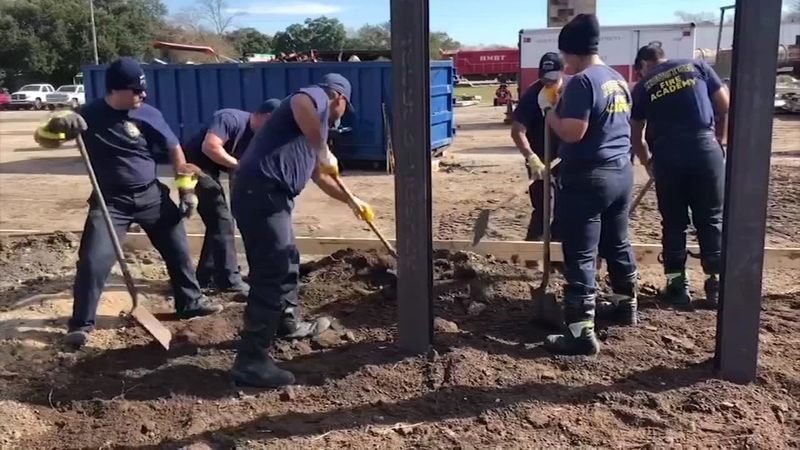 HOUSTON, Texas (KTRK) -- EDITOR'S NOTE: Since this article was originally published, Mayor Sylvester Turner has issued a statement. The full text of that statement appears below.

A group of Houston fire cadets, whose fates were in limbo while the city and firefighters union sparred over implementing Prop B pay parity, have been let go from the department.

The cadets were told in a meeting at 3:30 Thursday afternoon that their last day would be in early June.

ABC13 Eyewitness News obtained a copy of a layoff notice sent to 66 cadets who were waiting for the Prop B issue to resolve.

"The City of Houston has experienced a sizeable budget shortfall due to the implementation of Prop B," the notice opens. "I am sorry to have to notify you that your position is being eliminated by virtue of a force reduction (layoff) and your last day of employment with the City of Houston will be June 7, 2019 close of business."

The notice from HFD Chief Samuel Pena continues, "I want to assure you that the elimination of your position was a business decision and does not reflect your work performance or the value we place on your service to the City."

The cadets were caught in the middle of a political battle over Prop B. The measure calls for equal pay between Houston police officers and firefighters. They finished their training months ago at the Houston fire academy.

13 Investigates showed you how some of those cadets were spending some of their time digging ditches, doing yard work and building concrete training pieces. The mayor has refused to swear the cadets in over cost concerns. Sworn firefighters have more protection against layoffs.

Mayor Sylvester Turner has suggested as many as 380 Houston firefighters could be laid off. This week he said layoff notices to those firefighters will be sent this month. Those need council approval.

Council member Dwight Boykins staged two weeks of protests at council by delaying dozens of items over the un-sworn cadets.

On Thursday, Boykins told ABC13, "The voters spoke (on Prop B). I feel we as city leaders failed," Boykins said by phone. "I am ashamed. We all should be ashamed. We chose the easy way out instead of finding a sustainable solution to keep first responders employed."

The city's firefighters union said in a statement, "Sylvester Turner's layoff notices to taxpayer-funded, Houston-trained HFD cadets reflect the mayor's ineptitude, egotism, and a new depth of his vindictiveness. Today marks another sordid chapter of Turner's reckless neglect of the fire department and his contempt for firefighter families and 298,000 Proposition B voters."

Turner is meeting Thursday with council members, who were not briefed before the cadets were told of their layoffs, to discuss Prop B. Turner's office referred ABC13 to previous press releases, and said a formal statement from the mayor would be sent later Thursday

The cadets, who have finished fire academy training but have not been sworn in, allege Mayor Sylvester Turner is discriminating against them.

Thursday night, Mayor Turner issued this statement:
Proposition B came without a funding source as it adds $80 million to $100 million a year to the city's bottom line. At the same time, the city is experiencing a $117 million budget gap, with the cost of Prop B added on top of that.

By law, the city must balance its budget before the start of the next fiscal year, July 1.

The City asked Patrick "Marty" Lancton of the firefighters' association to phase in Prop B over five years to avoid any layoffs of firefighters and municipal workers. He refused and is demanding the immediate implementation of Prop B. The City is doing precisely that. but it will require layoffs to balance the city's budget.

Today the 67 fire cadets received notice that they will be laid off in 60 days. Next week 47 municipal workers will receive notices. And on April 17, City Council will vote on layoffs of classified (first responder) personnel.

In the absence of a phased-in approach, the City's options are limited when we must balance our budget by the end of June.

On April 3, 2019, the Mayor publicly stated that implementation of Proposition B will cost the City $79 million a year. This is a number that is significantly less than the $100 million Turner has been quoting for more than four months. Further, the $79 million quote also does not line up with Turner's own proposal for a four-year "phase-in" implementation plan that he released, proving yet again that the Mayor is unable to be truthful or factual on this, or any, issue.

In addition to his ever-changing cost estimates, something that even the City's Controller had to ask for clarity on, Turner had the gall in a press conference to scold the media for not asking the Firefighters Union the questions that he wanted answered. Laying aside why a mayor would be asking firefighters about city budgeting issues, the real question is this: Why is this mayor trying to use the media as a go-between? Shouldn't he, as the CEO of our city, be asking his questions for the union directly to the... union? This has gone on long enough.

Mayoral candidate Tony Buzbee is calling the Mayor's bluff on a "phase-in" being the only viable option to prevent firefighter layoffs. "Other than threatening layoffs or pitting employee groups against one another, what other cuts in his $6.7 billion budget has he proposed?," asked Buzbee. "How about cutting his bloated City staff, reducing the number of lawyers at City Hall, or canceling contracts that offer little to no value to the city? He fired these firefighters without any effort to cut unnecessary staff perks, without implementing a real hiring freeze, without modifications in the solid waste department or the parks department or the libraries, without asking the TIRZ's to pay for their fair share of city services, without a real audit of the enterprise funds or TIRZ monies, without selling city property we don't use, and without any attempt to restructure our debt," Buzbee said. "He made NO effort."

The City has spent millions in tax dollars training these cadets and is already paying overtime for employees of the fire department because of a shortage of firefighters. According to Buzbee, "We made a commitment to them like they made to us. The time has come to fire Turner."

Here is the statement from the King campaign:
"Laying off the cadets is pure vindictiveness and a stupid waste of the $3M Houston taxpayers spent on training them. Since The Prop B election and Turner's supposed hiring freeze he has approved hiring over 270 new employees at an annual cost of over $11 M annually. Included in the new hires are three "communication" employees in Turner's office. It shows where his priorities are."
OTHER PROP B NEWS: