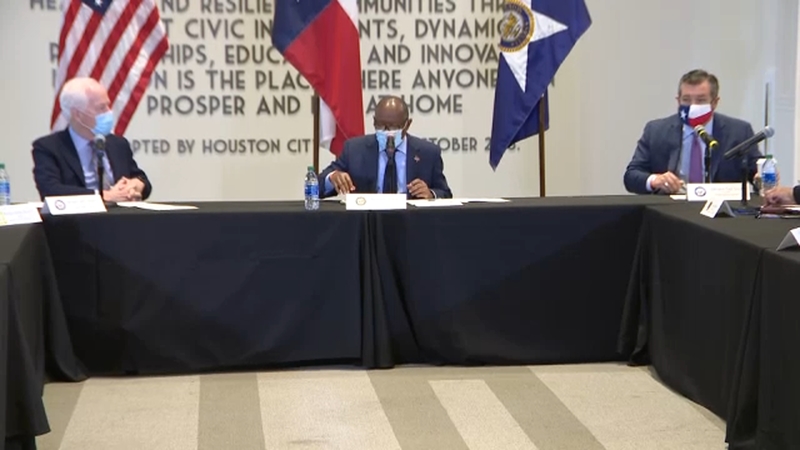 HOUSTON, Texas (KTRK) -- The relationship between law enforcement and the community is in the spotlight amid ongoing protests for equality and racial justice in the wake of the death of Houston native George Floyd, who died in Minneapolis police custody on May 25.

A number of people were involved in the discussion, including members of Houston law enforcement, union representation and local community and faith leaders.

Senators Cornyn and Cruz asked for feedback on the JUSTICE ACT, which they introduced to provide long-term solutions focused on police reform and transparency. Reform would include de-escalation tactics and ending the use of chokeholds.

"Nationally, John Cornyn and I, along with our colleague Tim Scott on the JUSTICE ACT.... it's designed to do a whole lot of things, including creating a national database so that if you have an officer with severe disciplinary problems who keeps getting in trouble over and over and over again, and that officer is applying at a different agency, that the agency will get access to those records," Cruz said.

The bill also asks for more body cameras to be used for better accountability, among other things.

"There's a lot of common ground and good will, and I think a unique opportunity to do what I also told the Floyd family and that is out of every tragedy what I look for is there something good that will come out of it? And I think there might be for the work we're doing here today," Cornyn said.

"Regardless of what takes place in D.C, in the end, we are the ones that's going to be the closest to the people and have the responsibility of effectuating those changes, whatever those changes may end up being," Turner said.

Watch a clip from the roundtable in the video player below.
EMBED More News Videos

What answers do officials such as Mayor Turner and Texas Senators John Cornyn and Ted Cruz have on police reform? Hear for yourself in the discussion above.