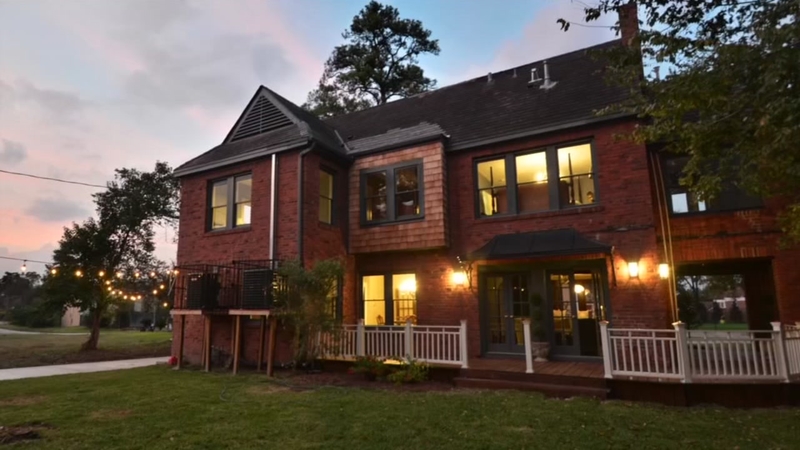 HOUSTON (KTRK) -- A father-daughter team working to restore Houston homes got a big surprise when they uncovered a link to the past. Now, they're hoping to sell the home to someone who can appreciate its place in the city's history.

It has been at least 25 years since the halls of the house at 2622 Riverside Drive have been filled with the sound of music.

As people filtered in and out of a Sunday open house, it's hard to imagine this Riverside Terrace gem was once an eyesore, tagged by the city as a dangerous building and destined for a wrecking ball.

Dilapidated, filthy and abandoned, it wasn't until Mike Cooney and Rachel Paxton of CFV Home Restoration uncovered something scrawled in the wood of a door frame, that they discovered the house's real worth to Houston.

As mayor, Massey was best known for striking a deal to sell off the land that would eventually become the home of the Texas Medical Center.

Wondering if the Massey family was still around, Paxton did a little research, eventually finding Louis Tucker, his grandson.
"It's pretty incredible - I know that back in the days when he lived here, he was a pretty influential and well-known citizen of Houston," Tucker said as he checked out Massey's signature scrawled into the piece of wood uncovered by Paxton and her father.

The renovated four bedroom, four and a half bathroom house features original trim, wooden floors and tiling, along with a wood-burning fireplace, two porches and a wine cellar.

"They're buying the history and they're buying a wonderful new house," Paxton's father and owner of CFV Home Restoration, Mike Cooney said. "The houses that we restore, and we call it restoring. We don't flip houses. You restore a house when you take it down to the studs and bring it back to its original character."

Now a protected city landmark, the home will live on as part of Houston's history.

Paxton and Cooney plan to list the home for $647,000. For more information on the home, visit the listing posted on the Houston Association of Realtors website.

SOMETHING TO DREAM ABOUT: Own your own League City area island
EMBED More News Videos

Need some solitude? How about living on your very own island for a change? (Photo Courtesy, ARA Newmark Houston)