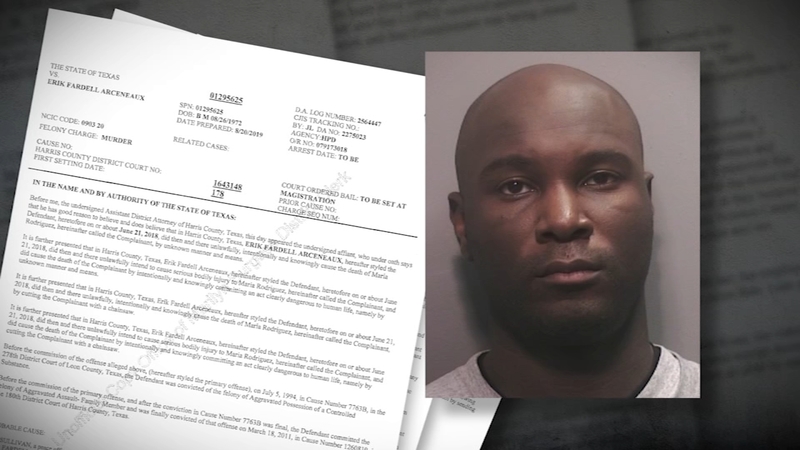 HOUSTON, Texas (KTRK) -- The United States Marshals Service is fervently looking for a Houston man who remains a wanted fugitive. The agency described 48-year-old Erik Arceneaux as a "violent and dangerous man" who needs to be brought to justice.

Arceneaux is charged with the brutal killing of Maria Jimenez. Investigators with the Houston Police Department accuse Arceneaux of dismembering her body with an electric chainsaw and disposing of it.

He's been wanted by the law now for more than a year and remains on the run.

READ MORE: Man accused of dismembering woman with chainsaw still on the run

Perez appealed to the public to help them catch who they called a "violent predator."

"We need the public's help," said Perez. "We know that people were there that knew about this. They're not being cooperative with law enforcement. If we get a credible tip on where this guy is laying his head, he's going to be asleep one night, and the door is going to come crashing in. A team of U.S. Marshals is going to arrest him."

Perez said someone out there has a tip and can help deliver justice for Maria's family.

"Erik Arceneaux has been sought by the U.S. Marshals Service ever since the warrant was issued for his arrest," said Perez. "We have Houston police officers as well as deputy sheriffs from Harris County on the task force. They've been deputized as U.S. Marshals. It gives them a greater reach to help with their investigations in finding this fugitive."

Crime Stoppers of Houston is offering a $5,000 reward for information on Arceneaux's whereabouts. You can report his whereabouts and remain anonymous by calling 713-222-8477or visiting the Crime Stoppers website