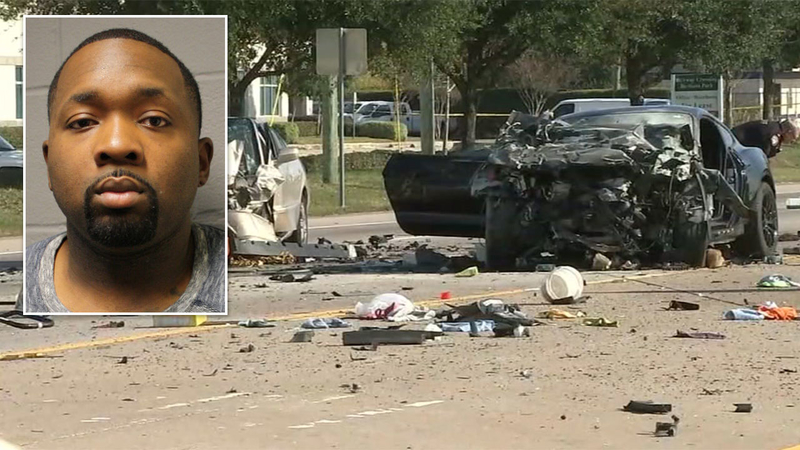 HOUSTON, Texas (KTRK) -- The grandson of a man killed by an alleged street racer, is glad to see the driver has been charged.

One of the two killed is 62-year-old grandfather Johnny Patterson.

"I was just looking forward to coming back from school and spending time with him but I don't get that anymore so it's something I just have to live with now," said Malik Brumley, Patterson's grandson.

The crash happened on Highway 249 near the Beltway in the middle of the day.

Investigators say the drivers of two mustangs, Franklin and Kevin Strong, were racing and swerving through traffic.

They are blamed for causing the crash that involved three cars and an SUV.

"The total disregard for anyone else that was out that day, Christmas Day, middle of the day," said Sean Teare, Harris County Vehicle Crimes Prosecutor.

The speed limit on that stretch of Highway 249 is 45 miles per hour.

At one point, Strong, who was in his mid-forties, t-boned Patterson's SUV and then hit an Acura.

Strong died at the hospital.

"It's Christmas Day, what possible reason do you have to be going that fast?," said Brumley.

The two people in the Acura, both in their twenties, were injured but recovered.

"We believe he is, the defendant, Mr. Franklin, is highly involved in street racing around Harris County," said Teare.

In fact, on Franklin's Twitter account, his bio says in part, "I live life by the quarter mile, street racing."

The charges Franklin is facing are second-degree felonies. He faces up to 20 years in prison and up to a $10,000 fine.