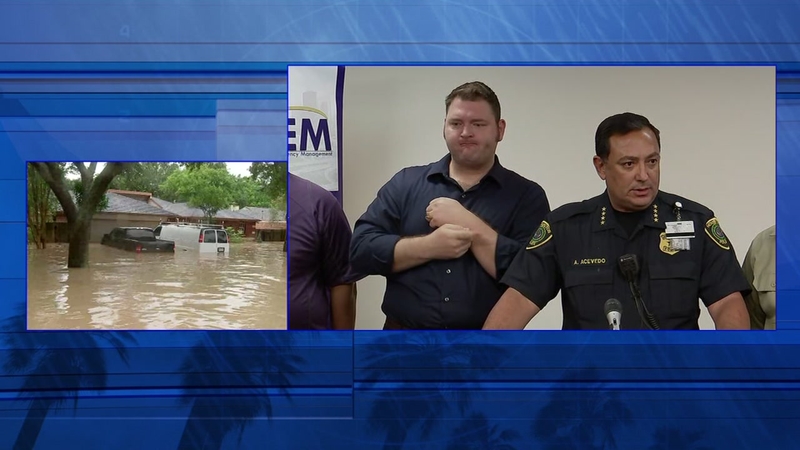 HOUSTON, Texas (KTRK) -- Houston Police Chief Art Acevedo said he is not going to tolerate criminals taking advantage of people in the community during such a devastating time.

NOTE: The city of Houston has announced a curfew from 12 a.m. to 5 a.m. The curfew remains in effect until further notice and exempts those seeking shelter, flood relief volunteers, first responders and those going to and from work.

He said his officers arrested 14 alleged looters since Sunday.

Those arrested will face stiffer punishments under a Texas law providing heftier penalties during a crisis, prosecutors announced Tuesday.

"People displaced or harmed in this storm are not going to be easy prey," Harris County District Attorney Kim Ogg said.

Burglarizing a home would normally bring a penalty of two to 20 years in prison, but now brings five years to life.
"This is the state of Texas. We are a welcoming city, but we are not going to tolerate people victimizing others," Acevedo said.

He said he will push for the fullest prosecution possible for any crimes committed during such a sensitive time.

Acevedo said his officers arrested a crew of people with guns robbing members of our community Monday night. They found them after a pursuit and took them into custody. He said officers also caught three looters at a Game Stop Monday night.
ABC News Anchor Tom Llamas shared a photo on Twitter just after 11:30 a.m. of a looting situation happening in the Houston area where the Coast Guard is flying overhead.

We informed police of the looting and Coast Guard is flying overhead. Multiple officers now on the scene. pic.twitter.com/OsVVNF1M06

And according to a tweet from The Venture, looters shot at a flooded Apple Store in Houston overnight.

The doors to a flooded @Apple Store in #Houston appear to have been shot at with a firearm. Looters have been rampant. #harveyflood #Harvey pic.twitter.com/qyywidgGdV

The owner of the Bronze Bar in Houston also shared a photo of her business with smashed windows writing, "My business that I've worked hard for was looted last night. I can't believe people are capable of this."

Acevedo, again, strongly reiterated that this type of act is not tolerated in the city of Houston.

"Don't come to Houston because you're going to be caught," Acevedo said. "That's despicable behavior."

.@ArtAcevedo: If you (criminals) take advantage of people in our community, we will prosecute you to the full extent of the law.