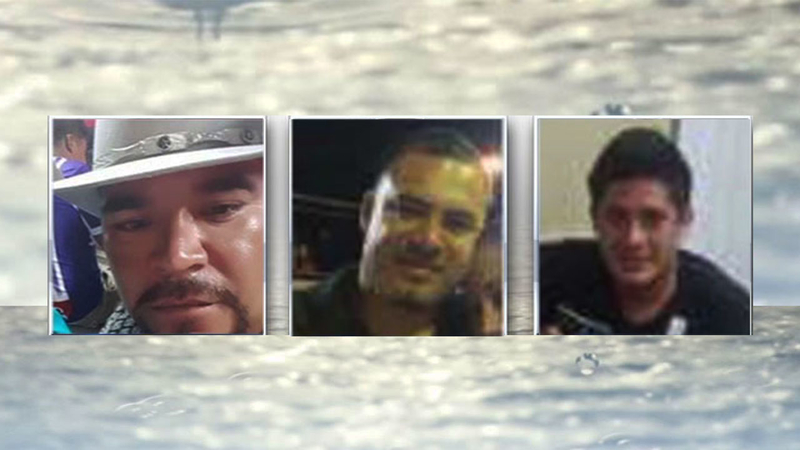 HOUSTON, Texas (KTRK) -- Four men who volunteered to rescue Hurricane Harvey flood victims have not been seen since Monday shortly after 3 p.m., when they jumped into the water to avoid electrocution, according to the wife of one of the missing men.

Seven people were on the small boat when it launched into the swollen and fast moving Greens Bayou near Wallisville Road and Normandy Street. A Facebook Live video posted to one of their accounts shows them in the boat on the water.

As the boat moved into the current, it apparently started to drift towards an electric pole.

According to Perla Jaquez, the wife of one of the missing men, all seven men jumped from the boat to avoid electrocution.

Three of the men were found Tuesday morning clinging to trees. They are currently hospitalized in Houston after being treated for burns.

They are identified as: Jose Vizuelt, 30, along with a reporter and photographer from a British media outlet, according to Jaquez. A spokesperson for that outlet could not be reached.

The missing are identified as:

All of the missing men are from Houston's northeast side. They were familiar with the area and all know how to swim.

Only one had a life jacket and one phone, which no one has answered.

Jaquez, Ben Vizuelt's wife, told ABC13, "They can swim but the currents are very strong and with the rain it is only getting worse for us."

They started volunteering Monday morning. Their first trip into floodwaters was to rescue a family member. Jaquez said they continued to work picking up strangers. When the incident occurred, they were apparently on the way to a family friend, whose home was surrounded by floodwaters.

Perla Jaquez is married to Ben Vizeult. They have three children, ages 17, 9 and 3.

ABC13 spoke to Jaquez at her mother's northeast Houston home. She told us she is proud of what Ben was doing.

She said she is "expecting the worst," but holding out hope that they will be found.

"I am praying for them to be saved - that we can find them stuck in a tree, but safe. We just hope they are alive and safe. They have already been there two days."