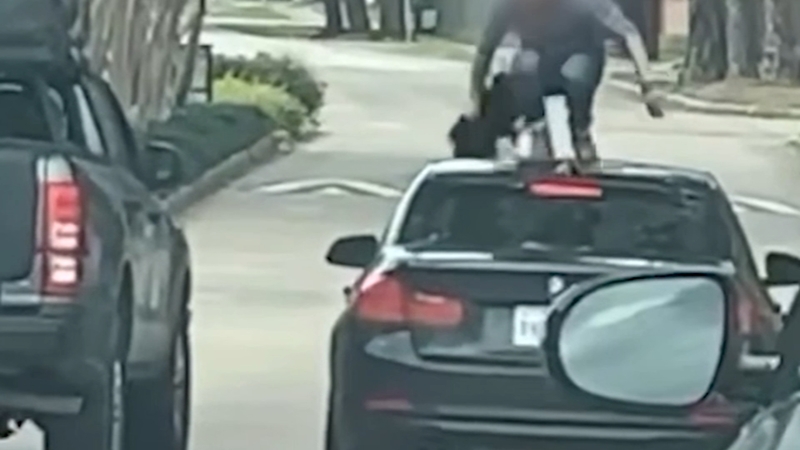 Road rage ends in fight with one person slamming on windshield

HOUSTON, Texas (KTRK) -- A freeway cutoff turned into a neighborhood street fight, resulting in one person smashing a windshield after he claims to have been assaulted.

The incident in question happened on Friday in The Heights. Another driver started to record when tempers flared.

The two-minute video ended with one person slamming his feet into a windshield. That person asked us not to identify him, but talked to ABC13 about the incident.

"When someone takes you out of your character, I think that's what really hurts," he explained.

It all started downtown, when Brittnay Wilson admits she wasn't the nicest driver.

"I cut in front of him," Wilson recalled.

Wilson said the other driver didn't take it kindly, and horns and words started flying.

"We did exchange words," Wilson said. "Once traffic started moving northbound on 45 he started following me."

But the other driver said that's not the case.

"She followed me because I started laughing because as we're driving through Midtown, downtown on 45, she's trying to throw stuff out of the sunroof of her car," he recalled.

Eventually, the two ended up in a Heights neighborhood. One driver got out of the vehicle, and the other followed. Both said the incident went beyond yelling.

"He spit on me, put his hands on me, and I had no choice but to defend myself there," Wilson explained.

The male driver said he tried to back away, but Wilson kept coming.

"My neck was bleeding," he recalled. "I've got this gash across my neck. She's still coming at me, spits on me."

Eventually, Wilson admits she grabbed a bottle of wine from the man's car. That's when the man said he attempted to get it back. Wilson asked him to get something of hers that had fallen. As he did, Wilson got in her car with the wine, prompting the man to jump on the windshield.

"It was a huge mistake," he said. "Tell her to call me up. I'll pay for your windshield. But everything else you have to be accountable for to. You assaulted me. You stole from my car."

Officers are still investigating what happened but so far, no one has been charged.

Since the incident, Wilson repaired her windshield, but says his "behavior was unacceptable."

"For a cutoff? Very unacceptable," she added.

It was an argument that officers say you can avoid by letting incidents on the highway go, because as the video shows, they can quickly escalate.