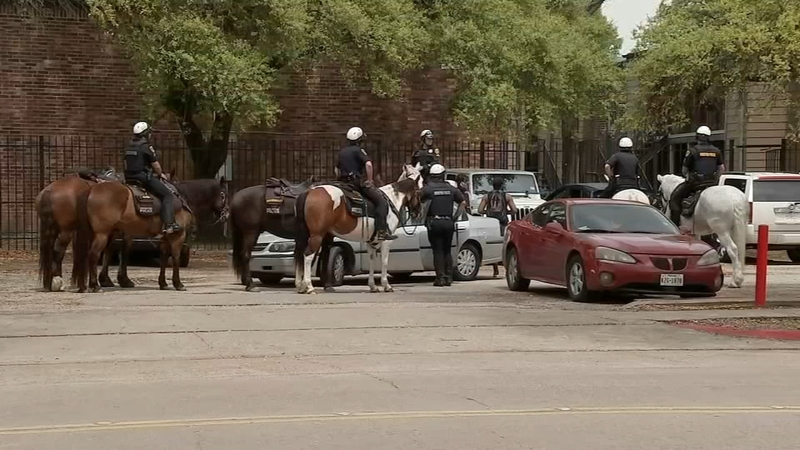 HOUSTON, Texas (KTRK) -- Two months ago, Houston leaders launched One Safe Houston, which aimed to help combat the increased violence and crime in the area.

In April 2021, the 13 Investigates team found a neighborhood near Hobby airport on the 10900 block of the Gulf Freeway where the crime was reported every seven hours.

During that time, ABC13 also uncovered there were more than 1,600 crimes reported between January 2020 and March 2021.

In February 2022, crime statistics indicate it's the neighborhood with the most crime in our area. In fact, 78 offenses were reported to police within the area near Cabo San Lucas Apartments. The main crimes reported were vandalism, aggravated assault, breaking and entering and burglary. Statistics show crime was up 65% in this area compared to February 2021.

Several neighbors in the area told ABC13 off-camera on Tuesday that they feel unsafe and it's dangerous.

Local food store manager Daniel Juarez said some customers come in drunk or high on drugs and start shouting, throwing things at him, or threatening him.

"Someone hit me in the back of the head and they had robbed me, so I was without a phone and broken collar bone," said Avery Phillips, who has lived in the neighborhood for two years.

Phillips was robbed a few months after initially moving into Cabo San Lucas apartments two years ago. He said his school laptop, TV, and cell phone were all taken at the time. He added that the suspect(s) responsible were never found or held accountable.

"Since the beginning of the year, our city has felt anything but safe," said Houston Mayor Sylvester Turner during a news conference in February 2020 while announcing the One Safe Houston initiative.

The program was launched to help rectify the issues we're seeing on our streets. Increased patrolling by Houston officers in high crime areas like this neighborhood on Houston's south side is one of several things city leaders are doing.

Juarez says he called the police before and it would take them at least 30 minutes to show up. He said now anything happens and police are around the corner asking if everything is OK or if he's OK.

While some say police presence has been up the last several weeks, others say it's still not enough.

Phillips said it's something everyone in this community needs to take a part in to instill actual change and make our streets in Houston safe for everyone.