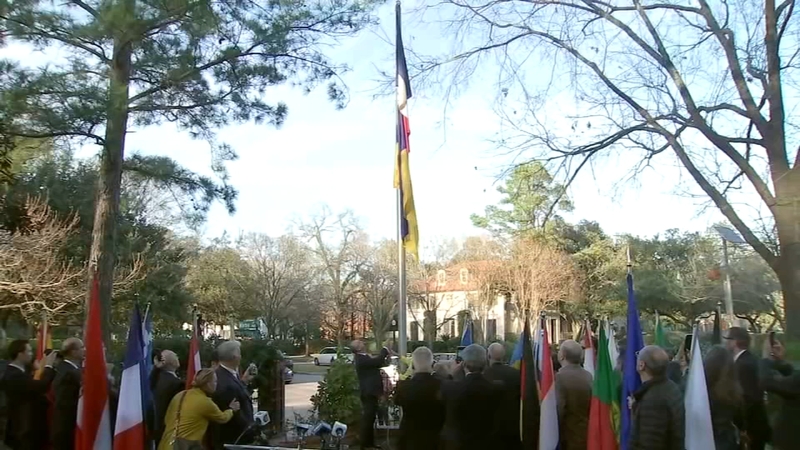 HOUSTON, Texas (KTRK) -- There was a powerful symbol Monday evening as the flag of Ukraine was raised above the residence of the French Consul General in Houston.

Our city has the second-largest consular corps in the country. With France currently chairing the European Union, just about every consulate representing an EU member showed up on Monday as a sign of unity on the European continent.

"We are standing shoulder to shoulder," said French Consul General Valarie Baraban. "We are here to express our full support and solidarity to the Ukranian authorities and the Ukranian people."

The Ukranian Consul General Vitallii Tarasiuk used the opportunity to not only thank the global community but to also press Texas leaders to do more.

"Texans and Texas businesses can do more," Tarasiuk said. "We would like Texas authorities be like the New York governor, announcing it's no longer OK for businesses in New York. We need that in Texas, too. It's time to show Putin that the world is united in supporting Ukraine."

Texas has one of the largest economies in the world, and Tarasiuk says Governor Greg Abbott and other leaders can assert themselves at the local level.

"I would urge Texas authorities to close ports to impose trade embargo with Russia, even in oil and gas."

As of Tuesday morning, only Russian products, like vodka, have been banned in Texas.