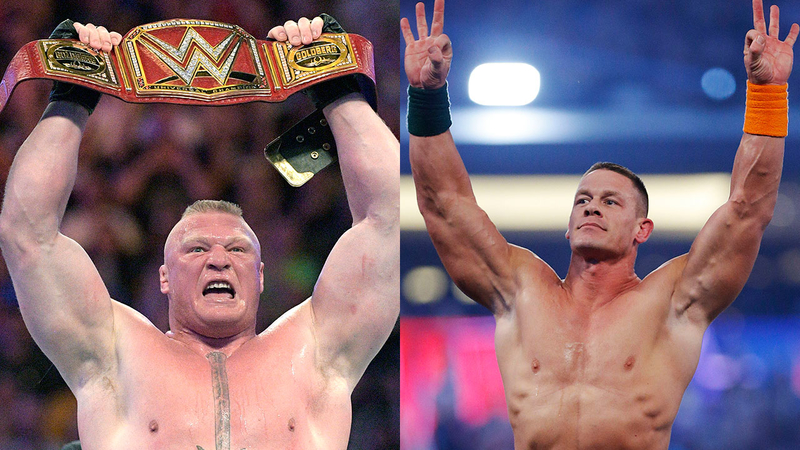 The pro wrestlers that the Astros identify the most

HOUSTON, Texas (KTRK) -- It is no secret that Houston Astros outfielder Josh Reddick is a big fan of professional wrestling.

Reddick has already introduced a championship belt in the clubhouse to recognize a player of the game for each team win.

The former Dodger, Red Sox player and Athletic has served as an ambassador for Major League Baseball to the WWE.

After all, the men and women of the wrestling company have to present as much athleticism and tenacity as the players who run the bases on the diamond.

Reddick is documented as saying pro wrestling on television became an escape during his rise in the Minors. He's also rubbed elbows with the elite athletes of the sport.

As just, we're taking a look at the pro wrestling personalities that most identify with Reddick and his Astros teammates. Whether it's in similar stature, character or path to stardom, these wrestlers can find a lot of themselves in the real-life personalities of these Houston Astros.

We'll start with Reddick, who has injected the grown-up fantasy world of pro wrestling to the Astros. His enthusiasm for his preferred form of entertainment is evident in his music to the plate, which is commonly known as Ric Flair's entrance song, to the rain of "Woo" chants all over Minute Maid Park.

Reddick's rise in the Majors wasn't exactly one of much dominance, favor or notoriety. He was cut twice from his middle school baseball team in Georgia. He excelled at the college level but at small Middle Georgia College. He was selected in the 17th round of the 2006 MLB Draft. He wasn't called up until 2009.

That rise can be seen in retired wrestler and general manager of the WWE Smackdown brand, Daniel Bryan.

Bryan climbed up from his humble beginnings of Aberdeen, Washington, bouncing around wrestling training facilities and developmental territories. It would ultimately take 10 years of seasoning and rising up internationally to finally crack the WWE.

And, if their comparison isn't stuck on just the long road they made, Bryan and Reddick have one more common bond: their uncanny facial hair growth.

Let's get the obvious part out of the way. Both the Venezuela born Altuve and the Mexican-American luchador Mysterio are supposedly undersized for their respective sports. Both are each 5'6".

Their height, though, hasn't gotten in the way of dazzling in their respective callings.

Altuve is a bonafied superstar, overcoming a cut during his first tryout with the Astros. Altuve has made baseball observers take notice of his skillful hitting and fielding, all worthy of MVP consideration.

Mysterio has been as dependable a wrestler as Altuve has been dependable to Houston. Mysterio's penchant to wow crowds, especially during WCW's cruiserweight heyday in the mid 1990's, has been the wrestler's trademark.

The San Diego native has been justifiably rewarded as the top guy in WWE on multiple occasions, the most prominent of which was his World Heavyweight Championship win at Wrestlemania in 2006.

Seth Rollins in the WWE is nicknamed "The Architect" for establishing, in storyline, the forceful faction, The Shield.

Carlos Correa, nicknamed "Showrrea," is the critical base of the left side of the Astros' infield that includes Altuve at second base and Alex Bregman at third.

Aside from their similar lanky statures, both Rollins and Correa have shown their value early on in their careers. Rollins was the first ever NXT Champion in his early WWE run. The company also had confidence in him when they had him win the WWE World Heavyweight Championship before he turned 30, at Wrestlemania no less.

Correa is a former AL Rookie of the Year and an MLB All-Star. Manager AJ Hinch has given him the confidence as a hitter to bat cleanup in the order.

Correa has a bright future, and Rollins' prospects for a dominant WWE career in his prime are quite bright.

Springer has done some amazing things in the Astros outfield, continuing to fill highlight reels with stunning catches.

Jeff Hardy similarly stuns crowds on the regular, showing off a risk-taking nature and a live-for-today attitude.

Both don't have to say much to show off the best of their abilities. For Springer, of course, the All-Star's stutter has been well documented, and he has come a long way to overcoming it.

For Hardy, the North Carolina native and one-half of the Hardy Boyz, with his brother Matt Hardy, isn't known primarily in the wrestling world for his mic skills.

But, when you have both men engaged, you are assured entertaining results.

You might as well call Bregman the "heartbreak kid" of the Majors.

The 23-year-old has a bag of tricks to make opposing hitters regret hitting into his side of the field. Similarly, Bregman has broken through to pitchers, the most impressive of feats came when a knocked a solo home run off of Clayton Kershaw in the World Series.

Shawn Michaels, meanwhile, was the person that WWE depended on for epic matches. Match bookers knew that he could reach into his own bag of tricks to get captivating matches, especially those involving rival Bret "The Hitman" Hart.

Bregman and Michaels have both exhibited exorbitant displays of confidence. Broadcasters during the World Series have observed Bregman as if he's the best player on the planet.

For the San Antonio native, Michaels has proven to have no shortage of macchismo when it comes to running the ropes. After all, he put Hart in the sharpshooter finishing move and helped cause a seismic shift in the pro wrestling world.

Bregman is still young and has enough bravado to cause a shift in the Majors.

Yes, both gentlemen have grown trademark beards that have contributed to their respective intimidation of opponents.

But, they have more than facial hair in common.

Keuchel began his stint with the Astros with a promising yet not-so loud career, garnering all-star consideration as early as 2014. By 2015, when his beard began a life of its own, Keuchel became a juggernaut on the hill, going 20-8 with a 2.48 ERA in route to a Cy Young award.

Bray Wyatt began his WWE stint with a questioning pre-beard alias, Husky Harris. Wyatt spent a few years in developmental to build up his backwoods cult-leader gimmick (don't forget about the beard). Wyatt and his beard was called up to the main roster to wreak havoc on wrestlers, becoming the leader of a destructive faction called The Wyatt Family.

While Wyatt made noise, his lack of accolades didn't match his overwhelming presence. This past year, he won his first WWE championship and later defended it at Wrestlemania.

Bottom line: It takes a while to reach the mountaintop. All you need his a good bushy reason to reach the summit.

Justin Verlander is the veteran of the Astros' rotation, having pitched in the World Series twice before this year. While he hasn't won the big one, he stays consistent, even though the Tigers made him expendable towards the end of his run in Detroit. Through it all, he is a proven winner.

John Cena is the leader of the WWE roster, given the torch just four years into his run with the company. Cena is a 16-time world champion, tying Ric Flair for most all time. And, through multiple injuries and a seeming winding-down of his in-ring career, he is a proven winner.

So far during his Astros run, Verlander has not lost in a Houston uniform. Cena, at one point, retained his WWE Championship for more than a year before relinquishing it due to injury.

And, if you want to go personal, both are engaged to very beautiful women.

While both Hinch and Heenan are known as managers by name, their leadership has ascended their charges to unprecedented levels.

Hinch's ball club has been in contention since his arrival in 2015. The 2017 club has been known as a record-breaking offensive baseball team that has already won the franchise's first World Series game.

Heenan, who passed away this year, is being remembered as one of pro wrestling's best managers. If there is a corollary to Hinch's pursuit of a title, Heenan's own pursuit to manage a champion in the heyday of Wrestlemania matches that.

Like Hinch, Heenan has history managing teams of athletes, most notably through his Heenan Family stable.

Like Heenan, Hinch has the opportunity to lead a rag-tag team of youngsters to the mountaintop.