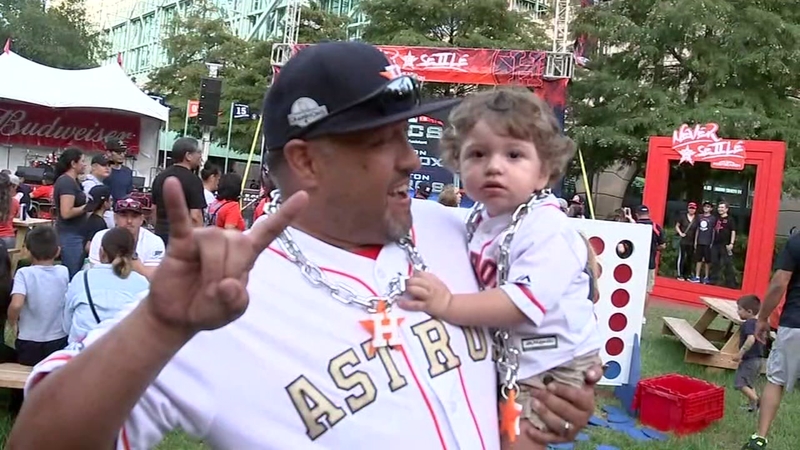 HOUSTON, Texas (KTRK) -- There's something in the air at Minute Maid Park.

"The roof is open, feeling fresh, loving it," said an Astros fan.

One fan who traveled from out of state said, "This is my first watch party. I'm from Kansas, but I've always loved the Astros. My dad is from Houston."

Most agree it's even hotter than this time last year.

A fan added, "I've always said baseball is magic. The Astros are like the unicorns, they have a relationship outside the field. On the field, they're gonna go all the way."

A grandfather who stood outside the gates waiting for the watch party to start, held his toddler grandson dressed in Astros gear. He said, "He's been my lucky charm. He was born in '16, they won the World Series. We're going to start a tradition here and see if we can't make it two in a row."

Inside the stadium fans commented on the adrenaline, excitement and anticipation of the games ahead saying there are even more fans here at the watch party this year.

The crowd filled the lower level stands from behind home plate, wrapping around to left field.

Another fan said, "I can't believe how many people are here. It's awesome. It's great support for the team."

The fans are not just dedicated, but very confident in the Astros potential to repeat as World Series Champions.

"We're gonna cream them," said one fan. Another added, "I have so much confidence they are going to do it again that I will get my second World Series Champion hat."