Homers from Springer and Altuve keep Astros alive in ALCS 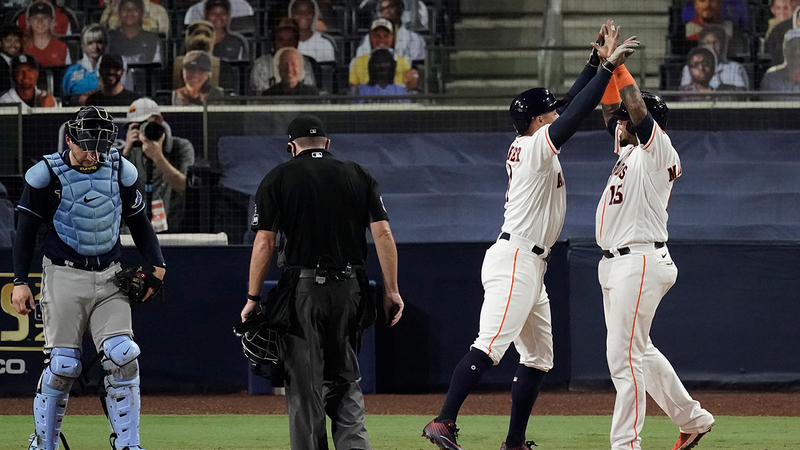 SAN DIEGO, California -- José Altuve and the Houston Astros are eager to match the 2004 Boston Red Sox in the history books.

Beating the Tampa Bay Rays three more times to reach the World Series won't be easy, but the Astros believe they can do it.

George Springer broke a tie with a two-run homer, Altuve also went deep and hit an RBI double, and Zack Greinke escaped a bases-loaded jam as Houston stayed alive in the AL Championship Series with a 4-3 victory Wednesday night in Game 4.

"We are very motivated," Altuve said. "We know the team we have and yes, we want to be the second team coming back from 0-3."

Big league clubs leading 3-0 in a best-of-seven postseason series are 37-1. The only one to rally from an 0-3 deficit was the 2004 Red Sox, who beat the New York Yankees in the ALCS and went on to win their first World Series in 86 seasons.

Greinke pitched six effective innings for the Astros, who held a meeting before the game. Houston manager Dusty Baker said he had no idea what was brought up, but he also addressed the team.

"We've got some real leaders on this team, some dominant personalities who listen more than they talk," Baker said.

With Altuve atoning for his poor defense in this series, the Astros finally got their offense going after being pushed to the brink of a sweep. Seeking their third pennant in four seasons, they trail 3-1 going into Game 5 on Thursday afternoon.

"I'm just happy that we won the game and we're on to tomorrow," Springer said.

The Rays remain one win from advancing to the World Series for the second time in franchise history.

"The team feels good," rookie slugger Randy Arozarena said. "We're going to stay positive. We came in here knowing we were going to face a solid team. They're probably feeling the same way."

In the video, see the moment the Houston Astros' sign-stealing scandal was used during the high-profile confirmation hearing of Supreme Court nominee Amy Coney Barrett.

Greinke, bothered by a sore arm in the Division Series against Oakland, made only one big mistake when he allowed a two-run homer to Arozarena that tied the game at 2 in the fourth.

Given a 4-2 lead by Springer's homer in the fifth, Greinke's biggest pitch came when he struck out Mike Brosseau on a 3-2 changeup to end the sixth with the bases loaded.

After Greinke allowed consecutive singles by Manuel Margot and Austin Meadows with one out, Baker came out for a chat and decided to let the veteran right-hander continue. Arozarena struck out on a check-swing and Ji-Man Choi singled to load the bases before Greinke fanned Brosseau.

On Friday night, Brosseau hit a go-ahead homer in the eighth inning off Aroldis Chapman of the New York Yankees that carried the Rays to a 2-1 victory in the Game 5 clincher of the ALDS.

Baker said he thought about putting in Ryan Pressly, but catcher Martin Maldonado said, "He can get this guy."

"I guess I don't change my mind, but I hadn't had my mind really, really made up until I got out there and I saw the look in Zack's eyes and Maldy was adamant about he can get this guy," Baker said. "I said, 'OK then you've got it then. This is the ballgame here.'"

Greinke said the meeting was "very intense," and praised the 71-year-old Baker. "He reads people really good. I don't think I've ever seen him make a wrong decision when he trusts what he sees. He sees the right thing almost 100% of the time. And not everyone has that skill."

Greinke held the Rays to two runs and five hits for his first postseason win since 2015. He struck out seven and walked one.

Tampa Bay's Willy Adames hit an RBI double off the bottom of the left-center wall and advanced to third on a wild pitch in the ninth before Pressly got rookie Yoshi Tsutsugo on a liner to right for the save.

"We've got to get the bats going, no doubt about it," Rays manager Kevin Cash said. "We've been carried here by our pitching and defense, which is how we're built, but we sure would like to get some (hits)."

Altuve hit a homer in the first and an RBI double in the third for a 2-0 lead. And when he needed to make an accurate throw to second for a key forceout in the ninth, the star second baseman was right on target.

His offense helped make up for his three errors that helped the Rays win Games 2 and 3 to move to the cusp of their first World Series since 2008.

Altuve homered for the second straight game and third time this series, all in the first inning. He and Springer are tied for the most homers in Astros postseason history, 18.

With two outs in the third, Altuve doubled into the right-field corner to bring in Maldonado.

"One of the most impressive things about José is how he can clear his head and contribute in all aspects of his game, and to see him go out there and still wanting the ball hit to him and still swinging the bat is a testament to him," Springer said.

Watching Altuve's errors was "tough," Springer said. "But I know who he is. I know the head he has on his shoulders. He's our leader and he always has been."

Arozarena homered onto the lower balcony on the Western Metal Supply Co. brick warehouse in the left-field corner with one out in the fourth to tie the game at 2. An inning later, Springer one-upped him when he hit a two-run shot onto the upper balcony of Petco Park's main landmark to regain the lead for the Astros.

"I knew it was a homer. I was able to hit a high fastball there. It's a tight line, so I'm happy that it stayed fair," Springer said.

It was the third home run of the postseason for Springer, the MVP of the 2017 World Series.

It was the fifth of these playoffs for Arozarena, who homered in each of the first three games against the Yankees and then connected in the ALCS opener.